Week 15 Review: A Shiver of Light 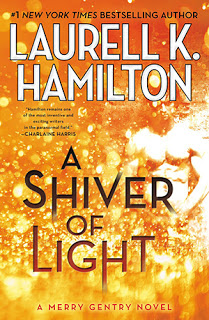 From Goodreads:
I am Princess Meredith NicEssus. Legal name Meredith Gentry, because "Princess" looks so pretentious on a driver's license. I was the first faerie princess born on American soil, but I wouldn't be the only one for much longer...

Merry Gentry, ex–private detective, now full-time princess, knew she was descended from fertility goddesses, but when she learned she was about to have triplets, she began to understand what that might mean. Infertility has plagued the high ranks of faerie for centuries. Now nobles of both courts of faerie are coming to court Merry and her men, at their home in exile in the Western Lands of Los Angeles, because they will do anything to have babies of their own.

Taranis, King of Light and Illusion, is a more dangerous problem. He tried to seduce Merry and, failing that, raped her. He's using the human courts to sue for visitation rights, claiming that one of the babies is his. And though Merry knows she was already pregnant when he took her, she can't prove it.

To save herself and her babies from Taranis she will use the most dangerous powers in all of faerie: a god of death, a warrior known as the Darkness, the Killing Frost, and a king of nightmares. They are her lovers, and her dearest loves, and they will face down the might of the high courts of faerie—while trying to keep the war from spreading to innocent humans in Los Angeles, who are in danger of becoming collateral damage.

My first reveiw of A Shiver of Light
My Review:
Wow, I really enjoyed reading this book again! I kinda read it out of order the first time, or at least, I read the start and then went back to the correct order until I got here again, and so it was really great to read this whole book together, like I was supposed to!

Yeah, this book has the birth of the babies! That scene was pretty hilarious, finding out that they're having triplets right before she goes into labor. They were so cute and adorable, and figuring out who is whose father genetically isn't going to be a picnic for some of the dads!

There was a lot going on with this book. Like the drama with her uncle. And with her aunt, but she seems to be recovering, though not until after she killed the boy. There were more signs of the Goddess favoring Merry. There's Sholto's death, which hit pretty hard. Yeah. So much to read, and just so enjoyable, though sometimes a bit hard!

For some reason, when I read this book the first time, I thought that this was the end of the series. Sure, it's now been 5 years since it came out, but there are a few plot lines that still have to be dealt with. Like how Frost seems to becoming more mortal like Merry. And the evil that the good guys might have absorbed when they killed the females of that one race. And the aftermath of Sholto's murder. And dealing with finances. So much, and I want more time with these characters!

Loved this book so much, and I really, really want more, and hope that we get it!