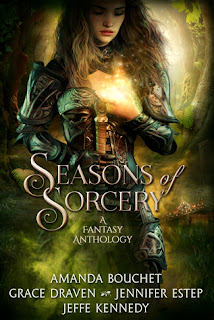 From Goodreads:
WINTER'S WEB BY JENNIFER ESTEP
An assassin at a renaissance faire. What could possibly go wrong? Everything, if you're Gin Blanco. This Spider is trapped in someone else's icy web—and it seems like they don't want her to leave the faire alive . . .

A WILDERNESS OF GLASS BY GRACE DRAVEN
The stretch of sea known as the Gray rules the lives of those in the village of Ancilar, including widow Brida Gazi. In the aftermath of an autumn storm, Brida discovers one of the sea's secrets cast onto the shore—a discovery that will change her world, mend her soul, and put her in the greatest danger she's ever faced.

A CURSE FOR SPRING BY AMANDA BOUCHET
A malevolent spell strangles the kingdom of Leathen in catastrophic drought. Prince Daric must break the curse before his people starve. A once-mighty goddess trapped in a human body might be the key—but saving his kingdom could mean losing all that he loves.

THE DRAGONS OF SUMMER BY JEFFE KENNEDY
As unofficial consort to the High Queen, former mercenary Harlan Konyngrr faces a challenge worse than looming war and fearsome dragons. His long-held secrets threaten what he loves most—and he must make a choice between vows to two women.

My Review:
Man, this was a really fantastic collection of stories! I mainly read it for Jennifer Estep and Amanda Bouchet, but I enjoyed the other two stories as well! Though I wish I'd known that they were part of established worlds, even if A Wilderness of Glass can be read as a standalone. Bah.

For these stories, I wanted to know why they were a part of this collection. Winter's Web, well, it takes place in winter, there's the event going on. A Wilderness of Glass was a little harder to pin down, but fall, I believe, the one only stated outright, and with the changing of the weather to winter and such. A Curse for Spring, yeah, that was really easy, they had Rain who was daughter of a goddess who was Spring. The Dragons of Summer is summer because events in this book happen because it's the longest day of the year, which happens in summer. Yeah.

There's a lot of adventure and action in these books. Some of the women are bad ass, and sometimes, they're put into situations where it turns out they're stronger than they thought. Which is always a delight to read!

All in all, I think my favourites were Winter Web, followed by A Curse for Spring, since I've read and enjoyed books by these authors before. Plus, I'd read the previous book in the series for the former, and the later is a stand alone story. I did enjoy the other two, but it's hard to know what I missed, given I haven't read the other books in the series.

Yeah, this was a really great collection, and I enjoyed it a lot!