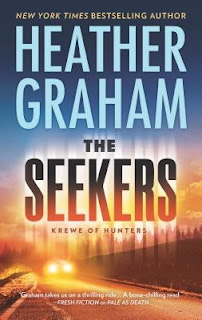 From Goodreads:
THE TRUTH IS SCARIER THAN FICTION

Keri Wolf has joined the crew of The Seekers, a show that searches for paranormal phenomena, as they explore a supposedly haunted old inn on the road between Philadelphia and Harrisburg. The place is famous for its warm welcome—and infamous for being the site of an ax murder rampage in the 1920s. They've barely begun when a very real dead body is discovered in the basement. As a nonfiction author, Keri is supposed to be the rational one, but she can't explain a terrifying apparition that seems to be both a threat and a warning.Former detective Joe Dunhill knows what she's going through—the strange gift of being able to see and talk to the dead is a struggle he shares. A new member of the FBI's Krewe of Hunters, he's on the team investigating the disturbing death. The town is steeped in old-fashioned superstition, and the deeper Joe and Keri plunge into the dark secrets of the inn, the closer they get to a devastating truth. Will a bloody history be repeated? Or can the spirits of the past reach out to stop a killer?

We get to spend more time with Joe, who is now on the path to becoming Krewe himself. Actor Carl is also in this book, and the ending had me thinking he could've been the hero in the next book, that would've really completed this little mini trilogy within the series, but alas.

I think this is the most modern crime that the ghosts were involved with in this series, at least for a while. If I remember right, not all of them even have a historic crime that spurs on the modern one, just that the ghosts stayed  behind for whatever reasons. So that was a bit different, the research was more front and center then behind the scenes and brought up with it was done!

Keri and Joe didn't got off on the right foot, that's for certain! There was a certain amount of animosity, since she maybe saw a woman in white, and since she didn't believe in ghosts at the time, well, yeah, that caused some conflict between them because he called her a liar. But that initial bad interaction made it all the more sweeter when the got together!

Yeah, this book was a really fantastic read, and I really enjoyed it!