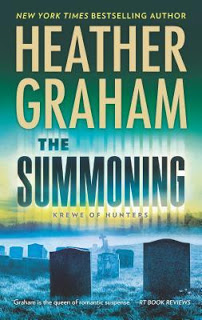 From Goodreads:
A CALL FROM BEYOND…

When Kristi Stewart inherits a property in the old part of Savannah, she knows it comes with stories of hauntings. But she doesn't believe in ghosts, even while she runs seances for the guests of McLane House Bed-and-Breakfast. Until the inexplicable midnight appearance of one of her infamous ancestors. Terrified, she flees into the night—and right into the arms of Dallas Wicker.

Dallas is trying to uncover the truth about a colleague who died under suspicious circumstances. As strange happenings continue to plague Kristi's home, it is soon clear that there's a very living threat in the neighborhood—several people have disappeared without a trace. Dallas can't find any connection between the victims, but someone wanted them gone, and it might be linked to the history of McLane House. And that means Kristi should be very afraid.

My Review:
I enjoyed yet another epic book in this series! It's getting pretty long-lived now, I think it's been going on for over 5 years, and then there's the original series, too. And we get some new characters-and some new ghosts-to hang out with, as well as some familiar faces!

Kristi and Dallas were a great couple. He's seen ghosts since he was pretty young, and she only started seeing ghosts during this book, so that was a good balance there! And yeah, the sparks between them were so great to read!

One thing that I and the investigators searched for, was the connections between the missing people and those that their deaths didn't look like murders. Sure, the gym guy knew the Kristi's grand-uncle's friend, but how did they connect to the missing businesswoman and missing politician? So the mystery was pretty excellent in this book!