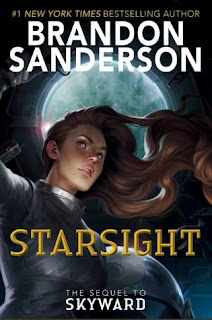 Starsight by Brandon Sanderson
Expected Publication: November 26th, 2019
From Goodreads:
All her life, Spensa has dreamed of becoming a pilot. Of proving she's a hero like her father. She made it to the sky, but the truths she learned about her father were crushing.

Spensa is sure there's more to the story. And she's sure that whatever happened to her father in his starship could happen to her. When she made it outside the protective shell of her planet, she heard the stars--and it was terrifying. Everything Spensa has been taught about her world is a lie.

But Spensa also discovered a few other things about herself--and she'll travel to the end of the galaxy to save humankind if she needs to. 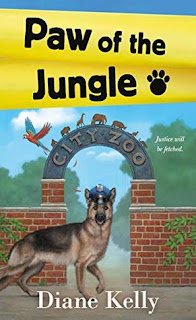 Paw of the Jungle by Diane Kelly
Expected Publication: November 26th, 2019
From Goodreads:
Police officer Megan Luz and her K-9 partner in crime, Brigit, are on all fours as they try to solve their latest Lone Star mystery.

AT THE ZOO
The weather is beautiful, work is slow, and her canine colleague could use a walk. What better day for Megan to take Brigit to the Fort Worth Zoo, where they can let loose and witness the law and order of nature unfold? But what begins as a fun field trip turns serious when a pair of rare hyacinth macaws named Fabiana and Fernando goes missing. Is the new custodian, a gentle soul who happens to be an ex-convict, to blame? Or is something far more sinister afoot?

AND ON THE HUNT
The birds are worth thousands of dollars, and the list of people on the premises who might have stolen them is long. Soon other animals start disappearing. . .and Megan and Brigit have their hands and paws full of suspects. But when a rare black rhino is taken from the zoo, presumably for its black-market-friendly horn, time is of the essence. Can Megan and Brigit find out who's behind the mystery--before they too become prey? 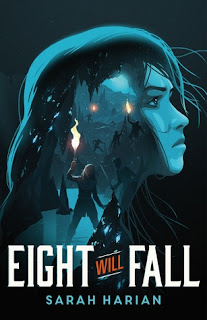 Eight Will Fall by Sarah Harian
Expected Publication: November 26th, 2019
From Goodreads:
Lovers of dark, high-octane adventure will be enthralled by Sarah Harian's Eight Will Fall, a genre-bending YA fantasy standalone, perfect for fans of Kendare Blake and Leigh Bardugo.

In a world where magic is illegal, eight criminals led by rebellious Larkin are sent on a mission to rid their realm of an ancient evil lurking beneath the surface. Descending into a world full of unspeakable horrors, Larkin and her crew must use their forbidden magic to survive.

As they fight in the shadows, Larkin finds a light in Amias, a fellow outlaw with a notorious past. Soon, Larkin and Amias realize that their destinies are intertwined. The eight of them were chosen for a reason.

But as the beasts grow in number and her band is picked off one by one, Larkin is forced to confront a terrible truth: They were never meant to return.

Wow, these are 3 amazing books by great authors in great series, and a new author to me, and I've read Paw of the Jungle, and yeah, it was excellent, and I can't wait for them to come out! What about you guys? Happy reading!
Posted by Louisa @ Words I Write Crazy at 6:00 AM