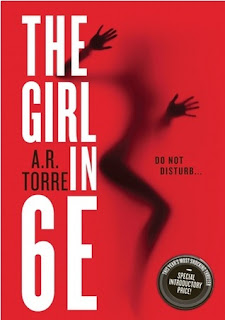 From Goodreads:
I haven't touched a human in three years. That seems like it would be a difficult task, but it's not. Not anymore, thanks to the internet.

I am, quite possibly, the most popular recluse ever. Not many shut-ins have a 200-member fan club, a bank account in the seven-figure range, and hundreds of men lining up to pay for undivided attention.

They get satisfaction, I get a distraction. Their secret desires are nothing compared to why I hide... my lust for blood, my love of death.

Taking their money is easy. Keeping all these secrets... one is bound to escape.

What if you hid yourself away because all you could think of was killing? And what if one girl's life was depending on you venturing into society?

Enter a world of lies, thrills, fears, and all desires, in this original thriller from A. R. Torre.

My Review:
Ok, this book won't be for everyone. After all, it's about a woman who wants to kill, but keeps herself enclosed in her apartment, and makes a living being a cam girl. So two vices, death and sex, right together. But I enjoyed this book!

Deanna was a pretty fascinating character. She willingly imprisoned herself in her apartment to keep herself from acting on her darker urges. She had a past, and I kinda guessed the one secret, though now I'm kinda wondering if she killed once or twice, since there was a gap of time between reading the first 2/3rds, and the last third.

First off, there were a few footnotes, that lead to articles about the various bits of information that we got. I don't mind that, though I won't be checking the links out, because there were some pretty weird things. But I'm glad they were there, for those that are interested in checking that information out!

There was a mystery, of who the bad guy was, and there were a few options, though I totally didn't guess who it was until it was basically spelled out, so that was really great! I wish we had a few more answers, why the guy was like that, but yeah, pretty satisfying read!

This book was a fantastic read, and I can't wait to read more of this series!