Week 36 Review: More Happy Than Not 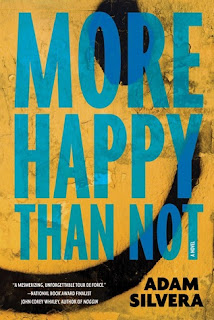 From Goodreads:
Part Eternal Sunshine of the Spotless Mind, part Aristotle and Dante Discover the Secrets of the Universe, Adam Silvera's extraordinary debut confronts race, class, and sexuality during one charged near-future summer in the Bronx.

Sixteen-year-old Aaron Soto is struggling to find happiness after a family tragedy leaves him reeling. He's slowly remembering what happiness might feel like this summer with the support of his girlfriend Genevieve, but it's his new best friend, Thomas, who really gets Aaron to open up about his past and confront his future.

As Thomas and Aaron get closer, Aaron discovers things about himself that threaten to shatter his newfound contentment. A revolutionary memory-alteration procedure, courtesy of the Leteo Institute, might be the way to straighten himself out. But what if it means forgetting who he truly is?

My Review:
This book was such a great read! The title says more happy than not, which does say that this book isn't always happy, which is the case. It's understandable, he's gay, or at least bi, and his dad died. Not to say that being gay makes you unhappy, but that the world isn't the kindest, which leads to the unhappiness. It's not deserved, and it's not fair. Bah!

I really enjoyed the way that this story was told, in different parts. The first of him meeting and falling in love with Thomas. The second where there's more falling and admitting that to himself. The third part, wow, was it it a doozy! I wasn't expecting that, though there were a few signs!

This book is set in a world that isn't unlike our own, it just has the Leteo Institute, which lets people forget things. It sounds intriguing, and there are some people who should get it, like those that experienced a trauma that they aren't healing by traditionally means. But not as a easy fix.

The ending, though! That just slayed, because it's not a happy ending, not really. It's resolved, but it's something to deal with. Please, if you see yourself in this story, yours doesn't have to end the same way. True, there's ups and downs in life, but yeah, that ending...parts of that can happen in real life, but not all of it!

Loved reading this book, it was a really fantastic read!