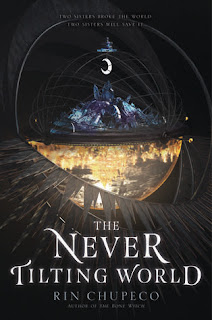 Generations of twin goddesses have long ruled Aeon. But seventeen years ago, one sister's betrayal defied an ancient prophecy and split their world in two. The planet ceased to spin, and a Great Abyss now divides two realms: one cloaked in perpetual night, the other scorched by an unrelenting sun.

While one sister rules Aranth—a frozen city surrounded by a storm-wracked sea —her twin inhabits the sand-locked Golden City. Each goddess has raised a daughter, and each keeps her own secrets about her sister's betrayal.

But when shadowy forces begin to call their daughters, Odessa and Haidee, back to the site of the Breaking, the two young goddesses —along with a powerful healer from Aranth, and a mouthy desert scavenger —set out on separate journeys across treacherous wastelands, desperate to heal their broken world. No matter the sacrifice it demands.

My Review:
Wow, this book was so fantastic! I enjoyed learning about this world, of gates and Goddesses, and yeah, I can't wait to learn more, because there are so many secrets! I need to know more about it all! Like, who is their mother? What exactly happened to cause the Breaking?

I really enjoyed how this story was told. It went in order of Lan, Arjun, Odessa, and then Haidee, and then would repeat. So we'd alternate between the group in unending night, and the pair in unending day, and between the teen Goddesses and their love interests. Kept things very fast paced and I loved it!

It was so great to watch these characters going on this journey! Since we got to see all sides of it, we also knew more than they did. And while we knew that there were sacrifices, they weren't stated like the gifts. And then it came together, and it was like, oh, yeah, that's why things are like this!

Between the older generation, Latona and Asteria, I'm not sure which one I disliked the most. They both had some good sides, but they both had negative sides. And at least one of them was lying. And its their actions that broke the world. Yeah.

I have so many questions. Like, which Goddess is their mother? And the prophecy that they go through, with the gifts from the Galla. Did the Goddess who went through it also have the children, or did the one who didn't go through it have the twins? And what exactly did they do to cause the Breaking? And did one of the older generation, did they know the other was alive? Or did they both know, because they both ended up with a "daughter?" And then there's the prophecy about the current generation, which twin was it talking about? I can't wait to find out!

This book was just utterly fantastic, and I can't wait to see how it's going to wrap up in the sequel!