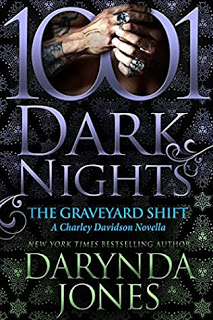 Guarding a precocious five-year-old who is half-human, half-god, and 100% destined to save the world is no easy feat.

Garrett Swopes was the ultimate skeptic until he met a certain hellion and her husband. They vanished after stopping a catastrophic event and left him, a mere mortal, in charge of protecting their gift to mankind. But when she disappears as well, he needs the help of another breed of hellion. One who can see past the veil of space and time. One who betrayed him.

She will get a truce in the deal, but she will never earn his forgiveness.

Marika Dubois's son—a warrior in the coming war between heaven and hell—was foreseen long before his birth. But to create a child strong enough to endure the trials that lay ahead, she needed a descendant of powerful magics. She found that in Garrett Swopes and tricked him into fathering her son. A ploy he has never forgiven her for. But when he knocks on her door asking for her help, she sees the fierce attraction he tries to deny rise within him.

And Marika has to decide if she dares risk her heart a second time to help the only man she's ever loved.

My Review:
This book was just an amazing read! I'm so glad that we got to be in this world again, that we got to have Garrett and Marika's story. They were in the main series, but they weren't the focus, so I was really glad to get their story!
Garrett doesn't trust Marika, and for fairly good reason. She basically went after him to get pregnant, and once she did, she basically walked away without telling him. So things are pretty tense between them, but they still have an attraction, and that dynamic was great to read!
This was such a short read, and what with everything that was going on, between Beep and the romance, this book just flew right on by! I was on the edge of my seat, I just wanted to know what was going to happen next!
Reading this book was really great besides the fact that we got more of this world. Because Beep does have the whole "defeat Satan" thing she has to do. And we're slowly but surely making our way there. I'm really hoping that we'll get a spin off series after the Sunshine Vicram series is done, to let Beep finish growing up, because it can't end with just one book! That'll be a big story, for sure!
This was a really fantastic read, and I can't wait for the next novella! Yeah that Amber and Quentin are getting a story, but boo that it's so far away! I just want to read it now!