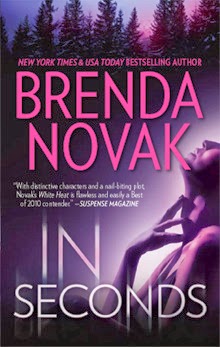 From Goodreads:
They're back...

Laurel Hodges has changed her identity twice. She's been on the run for the past four years, trying to outdistance the gang members who blame her for the death of one of their own. She's finally found peace and stability in the small town of Pineview, Montana. But just when she thinks she and her children are safe...the nightmare starts all over again.

My Review:
Yeah, I've finally read this book! I don't know how long I've been meaning to read it, probably since not too long after it came out, but yeah, it took till now to actually get around to it, but I have, and yeah, it was a pretty freaking great thriller with a bit of mystery!

While I felt bad that her and Rex didn't work out, her and Myles worked out pretty well, and yeah, they had a good relationship! What with her hiding away from The Crew, and him being the sheriff, yeah, that was just a powder keg waiting to explode. Oh, did I mention, he's her next door neighbour? Yeah.

I loved to hate the POV's of Ink, because he's a psychopathic killer, and had some truly horrible thoughts that yeah, I wouldn't want to be in my head, because *shudders* not clean thoughts at all! Those of his fellow prison breakee, weren't as bad, because he wasn't a hard core criminal. And he was more scared of Ink then anything.

I hope that they mystery of how The Crew found them in DC is solved, because I'm wondering about it, and it's going to itch at my brain till it's solved, so I hope that it's in In Close, because that would just be really great! And speaking of the 3rd book, I hope we get a good deep look at their lives, and Claire and her sister, because that was really interesting!

I can't wait to read the 3rd book, and yeah, this one was pretty darned good!