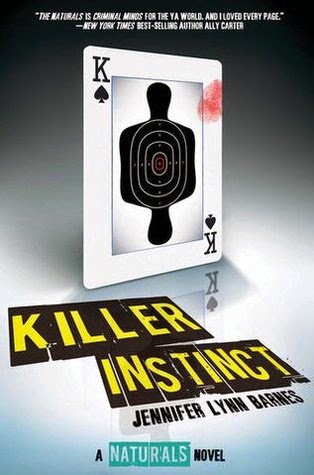 From Goodreads:
Seventeen-year-old Cassie Hobbes has a gift for profiling people. Her talent has landed her a spot in an elite FBI program for teens with innate crime-solving abilities, and into some harrowing situations. After barely escaping a confrontation with an unbalanced killer obsessed with her mother's murder, Cassie hopes she and the rest of the team can stick to solving cold cases from a distance.

But when victims of a brutal new serial killer start turning up, the Naturals are pulled into an active case that strikes too close to home: the killer is a perfect copycat of Dean's incarcerated father—a man he'd do anything to forget. Forced deeper into a murderer's psyche than ever before, will the Naturals be able to outsmart the enigmatic killer’s brutal mind games before this copycat twists them into his web for good?

With her trademark wit, brilliant plotting, and twists that no one will see coming, Jennifer Lynn Barnes will keep readers on the edge of their seats (and looking over their shoulders) as they race through the pages of this thrilling novel.

My Review:
I loved this sequel! It had enough information that I wasn't lost since it's been a while since I read The Naturals, but not too much that it was more about the first book then the second, and it's ability to stand on it's own, it gets a 5/10, because this is still the same narrator, and group, and while the mysteries are stand alone's, it's the personal stuff that happens that in each book that makes this series' books less of stand alone's within the series.

In this book, for me, the main personal thing in this book, was that Cassie chose which guy she was going to be with. And while I feel sorry for the guy that she didn't choose, she did chose the guy that was best for her, so while I hope that there's at least 1 more book (preferably like, 10 more!) this is something that I hope doesn't have main conflict, just little couple fights that everyone has, not break up fights!

Absolutely loved the mystery, The Naturals was personal to Cassie, this one was personal to Dean, and we got to learn more about his dad, and yeah, there were 2 major twists, and I guessed the first one, but the second one? That one blew me away!

So I have this list of names that was important to mention: Briggs Sterling, Judd Michael Dean Lia Sloane Scarlett Hawkins. So, Briggs, and Sterling, they were a new interaction, because someone had to replace Cassie's aunt, and that was Sterling, who has a personal connection to Dean, as well as Judd and Scarlett. Michael and Dean, their relationship is a bit strange, because they like the same girl, but they do care for one another. Lia, and Sloane, we learn a bit more about them. And Hawkings, I think I remember who he is, and what he does, that was pretty great, it's putting a bit of a spin on the series, which is why I hope that there's more books!

Yeah, this was just such a wonderful book, I really hope that there's more because it's just so freaking good!