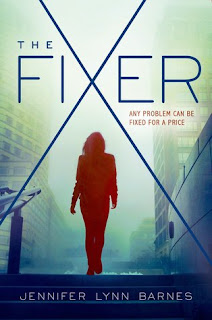 My Review:
This book was just so fantastic! I love reading Jennifer Lynn Barnes books, and this book is a prime example why! They're just so great, so intriguing, so well written and amazing! I just love them so, so much! Just so great!

I really enjoyed reading about Tess, she's had to hid her grandfather's illness by herself. And then her whole life is uprooted and she learns more about her sister, what she does. That she fixes political situations. Like, for the powerful people like the President of the United States. Yeah.

The mystery of what was going on behind the scenes, what was causing so much death and destruction for political power, and how Tess was pulled into it, was just fantastic to read! It was hard, but it was just so good!

Really enjoyed how things concluded, that there were some more mysteries to solve, that there's still a bad guy out there, but they had gotten most of them! And the revelations about Ivy is her mom, and who her dad's family is!

Such a wonderful book, starting off a really fantastic series, and I just can't wait for The Long Game, yeah that it comes out soonish!