Week 13 Review: Ask Me How I Got Here 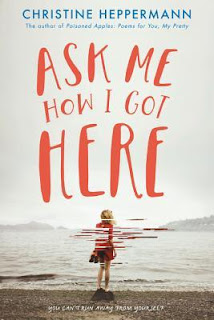 From Goodreads:
From the author of the acclaimed Poisoned Apples comes a novel in verse about a young woman and the aftermath of a life-altering decision. This thought-provoking and sophisticated read further confirms Christine Heppermann as an important voice in the tradition of Ellen Hopkins, Laurie Halse Anderson, and A. S. King.

Addie has always known what she was running toward. In cross-country, in life, in love. Until she and her boyfriend—her sensitive, good-guy boyfriend—are careless one night and she ends up pregnant. Addie makes the difficult choice to have an abortion. And after that—even though she knows it was the right decision for her—nothing is the same anymore. She doesn't want anyone besides her parents and her boyfriend to know what happened; she doesn't want to run cross-country; she can't bring herself to be excited about anything. Until she reconnects with Juliana, a former teammate who's going through her own dark places. Once again, Christine Heppermann writes with an unflinching honesty and a deep sensitivity about the complexities of being a teenager, being a woman. Her free-verse poems are moving, provocative, and often full of wry humor and a sharp wit. Like Laurie Halse Anderson and Ellen Hopkins, Christine Heppermann is a voice to turn to for the truth of difficult subjects. Ask Me How I Got Here is a literary exploration of sexuality, religion, and self-discovery.

My Review:
This was my second novel in verse that I've read.This one had Addie writing poems, as well as the verses that were the story. So that was really interesting, and made for a quick read, if it meant that we had to read between the lines, to understand what happened that wasn't recorded-verses don't give quite the same detail as other books!

I enjoyed the fact that we got the time going by, in the different months, that gave a bit of a frame of reference as to what was going on. Which helped give those details that the verses didn't. So yeah, really liked that!

This was a story about a young woman finding out who she was, what she wanted. That it turned out that she didn't want a baby, so she got an abortion. And then didn't really connect with anything, as noted in the synopsis. Yeah.

I wish we'd learn more about what happened to Juliana, because something did. And if someone else knows, could figure out, I'd like to know, because it's a little itch, that I don't know! It's part of the story, and not knowing, not fun!

Loved this book, it was so great, and yeah, I hope others enjoy it!