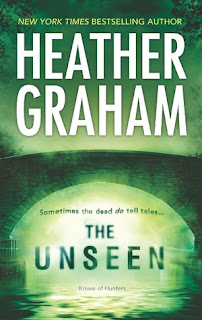 From Goodreads:
Sometimes the dead do tell tales...

1800s. San Antonio, Texas: In room 207 at the Longhorn Saloon, in the long shadow of the Alamo itself, a woman renowned for her beauty was brutally murdered. Her killer was never found.

One year ago: In that same historic room, another woman vanished without a trace. Her blood was everywhere...but her body was never recovered.

Now: In the last month, San Antonio has become a dumping ground for battered bodies. All young women, many of them long missing, almost all forgotten. Until now.

Texas Ranger Logan Raintree cannot sit by and let his city's most vulnerable citizens be slain. So when he is approached to lead a brand-new group of elite paranormal investigators working the case, he has no choice but to accept the challenge. And with it, his powerful ability to commune with the dead.

Among Logan's new team is Kelsey O'Brien, a U.S. marshal known for her razor-sharp intuition and a toughness that belies her delicate exterior. Kelsey has been waiting all her life to work with someone who can understand her ability to "see" the past unfolding in the present. Now she has her chance.

Together, Kelsey and Logan follow their instincts to the Alamo and to the newly reopened Longhorn, which once tempted heroes with drink, cards and women. If the spirits of those long-dead Texans are really appearing to the victims before their deaths, only Kelsey and Logan have the skills to find out why. And if something more earthly is menacing the city's oldest, darkest corners, only they can stop it—before more innocent women join the company of San Antonio's restless ghosts....

Birds were kinda a big thing in this book. They were a warning, they were evidence finders, and they just plain helped out the good guys. And that ghosts and birds were kinda connected, well, yeah, really enjoyed reading about that!

Logan and Kelsey were their own people, they both had these gifts of noticing the paranormal and used it for their jobs in law enforcement. They were good people and I really enjoyed watching their relationship deepen as they fell in love with each other!

I remembered that her friend was one of the bad guys. I'd forgotten the identity of the other one. And I wish that it wasn't who it was, because that just left a sad feeling, that hey, they helped this guy, and here he was, going around and killing people, or at least helping Sandy do so. Yeah.

Really enjoyed this book, and I can't wait to read more of this series!