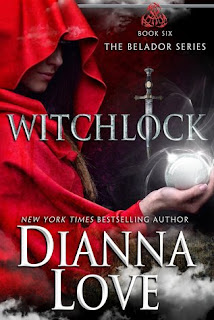 From Goodreads:
Witchlock vanished in the 13th century… or did it?
Some win. Some lose. And some will never be the same again.

After finally earning her place among the Beladors, Evalle is navigating the ups and downs of her new life with Storm when she’s sucked into a power play between her Belador tribe and the Medb coven. Both groups claim possession of the Alterants-turned-gryphons, especially Evalle, the gryphon leader. But an influx of demons and dark witches into Atlanta threatens to unleash war between covens, pitting allies against each other as a legendary majik known as Witchlock invades the city and attacks powerful beings. Evalle has one hope for stopping the invasion, but the cost may be her sanity and having to choose which friend to save.

My Review:
Yeah, another Belador book! It was so fantastic to be in this world again with these characters! So enjoyable and so great! This was a more contained adventure, but it's going to carry it's effects into the next book!

It's like Evalle can't catch a break! First there's the tension between Storm and Feenix because both are territorial over Evalle. Then there's helping Adrianna with the favours that they owe her. Then she's accused of murdering a Medb witch and has to prove her innocence, again.

There was also other things going on. Like the witches working to create a council for political reasons involving the coalition, that the Medb have been able to be on Earth and join VIPER. There's also Tzader and Brina, which seems like it's going to be the big thing of the next book!

Yeah for a really awesome ending! It sucks about Adrianna's sister, but the bad guy didn't win. And I think it was a good choice to leave her alive, though I'm concerned what she'll do since she does still have some information that could hurt them! And Storm's housing solution! Fantastic!

Such an enjoyable book, loved it so much, and I can't wait to read more of this series!