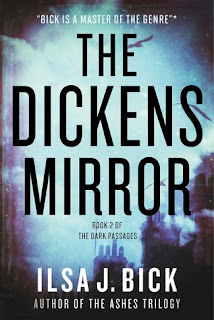 From Goodreads:
Critically acclaimed author of The Ashes Trilogy, Ilsa J. Bick takes her new Dark Passages series to an alternative Victorian London where Emma Lindsay continues to wade through blurred realities now that she has lost everything: her way, her reality, her friends. In this London, Emma will find alternative versions of her friends from the White Space and even Arthur Conan Doyle.

Emma Lindsay finds herself with nowhere to go, no place to call home. Her friends are dead. Eric, the perfect boy she wrote into being, and his brother, Casey, are lost to the Dark Passages. With no way of knowing where she belongs, she commands the cynosure, a beacon and lens that allows for safe passage between the Many Worlds, to put her where she might find her friends—find Eric—again. What she never anticipated was waking up in the body of Little Lizzie, all grown up—or that, in this alternative London, Elizabeth McDermott is mad.

In this London, Tony and Rima are "rats," teens who gather the dead to be used for fuel. Their friend, Bode, is an attendant at Bedlam, where Elizabeth has been committed after being rescued by Arthur Conan Doyle, a drug-addicted constable.

Tormented by the voices of all the many characters based on her, all Elizabeth wants is to get rid of the pieces under her skin once and for all. While professing to treat Elizabeth, her physician, Dr. Kramer, has actually drugged her to allow Emma—who's blinked to this London before—to emerge as the dominant personality…because Kramer has plans. Elizabeth is the key to finding and accessing the Dickens Mirror.

But Elizabeth is dying, and if Emma can't find a way out, everyone as they exist in this London, as well as the twelve-year-old version of herself and the shadows—what remains of Eric, Casey, and Rima that she pulled with her from the Dark Passages—will die with her.

My Review:
I finally got through this book! It was a bit honking one at almost 600 pages, but I finally read it, yeah! This book was strange and creepy and wonderful, and I really enjoyed reading it! Just a fantastic read!

This book was just a bit terrifying. Just imagine if you were a book character, and you slowly became aware that things didn't quite make sense, that details were missing. And you didn't know what was going on. Scary!

And that's not to mention all the crazy things that happened in this book! Like the dying Tony from the valley kinda attached to the alternate Victorian world Tony. Or Doyle's hallucinations that repeated. Yeah, there were some pretty creepy things going on in this book!

The thing about self-aware, or becoming self aware characters is, that conventional devices used by authors, like time jumps in books are noticed, and remarked upon. And that was another element of creepiness! Because you have to wonder-what happened in that time?

A big part of the end of this book, was the discoveries of who was actual real, and who was copies, and who were book people. Or different copies of book people. And how the McDermott family is all a part of the confusing mess that turned to order in this book!

I love the fact that the book world that was the alternative Victorian world was called The Dickens Mirror. And it's in this book. It's like, world within world, and it kinda starts to hurt my head, reading a book about book characters in an unfinished book with the same title.

I do a have a few questions. Like, what happened to the whisper-man? And what was the Black Dog? Because McDermott created Doyle, and yet didn't mention anything. Or did he just not think it really important? It's just that it's been so long since I read The White Space, things are a little confused up in my head!

It was just a little bit sad, that the one constant for Meredith and Elizabeth, would be that Elizabeth would die, and then Meredith would. And that in his attempts to recreate them, that's what stayed, what would always be a fly in ointment.

I loved the ending, with the book versions of the characters that we got to know in White Space back in their stories-and how Ilsa J. Bick put herself and an event promoting this book in Emma's-and the three from alternative Victorian world in a new Now, and with the shadow characters!

Yeah, loved this book, so enjoyable and crazy, and a pretty darned great end to this duology! Because, mind blown!