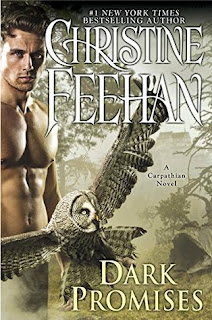 From Goodreads:
Gabrielle has had enough of battles, of wars, of seeing Gary Jansen, the man she loves nearly lose his life when it isn't even his fight. Once he was a gentle and very human researcher. Now he's a fearless and lethal Carpathian warrior with the blood of an ancient lineage coursing through his veins—a man Gabrielle still needs and desires and dreams of with every breath she takes. All she wants is a life far away from the Carpathian mountains, far from vampires and the shadows cast by the crumbling monastery that hides so many terrible secrets. But Gabrielle soon learns that promises made in the dark can pierce the heart like a dagger.

And she isn't the only one in search of answers in the corners of the unknown...

Trixie Joanes has come to the Carpathian mountains in search of her wayward granddaughter, fearing that she has been lured there by something unspeakable. Instead, Trixie has stumbled into the path of a desperate man and a woman in love and on the run. And they're all fated for the lair of a mysterious ancient with revenge in his soul and the undying power to make bad dreams come true.

My Review:
Gah, this book! It was such a great instalment to this series that is just so freaking great. And it built on Dark Ghost, because Teagan and her grandmother, Trixie. This book was just so great to read, and just so enjoyable!

We've been waiting for Gabrielle and Gary to get together since they first met. So when that didn't happen in a pretty disastrous manner, well, I just had to know who she was lifemates with! And Christine Feehan didn't disappoint! Aleksei was everything we've come to expect from Carpathian males, but tenfold!

We also got the story of Trixie and Fane, the protector of the monastery, since he hasn't had to deal with the darkness as long. That was just really awesome to read, and when Trixie was comforting Gabrielle. That was great!

This story helped long a few points. Like, that maybe Gabrielle's mom didn't quite have as good control over the jaguar as was previously thought. And the way that Teagan, Trixie and Gabrielle were able to help the ancients in finding their lifemates-that's going to be a pretty big thing!

Loved this book, such a great instalment, my only negative is that it was too short for two couples, and there are scenes that I know have to happen, and I want to see them, but they haven't happened yet!