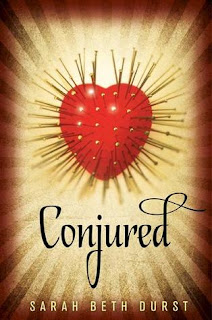 From Goodreads:
Eve has a new home, a new face, and a new name—but no memories of her past. She’s been told that she's in a witness protection program. That she escaped a dangerous magic-wielding serial killer who still hunts her. The only thing she knows for sure is that there is something horrifying in her memories the people hiding her want to access—and there is nothing they won't say—or do—to her to get her to remember.

At night she dreams of a tattered carnival tent and buttons being sewn into her skin. But during the day, she shelves books at the local library, trying to not let anyone know that she can do things—things like change the color of her eyes or walk through walls. When she does use her strange powers, she blacks out and is drawn into terrifying visions, returning to find that days or weeks have passed—and she's lost all short-term memories. Eve must find out who and what she really is before the killer finds her—but the truth may be more dangerous than anyone could have ever imagined.

My Review:
Reading this book, was just really fantastic! All of Sarah Beth Durst books are amazing, and the worlds in them. I just love reading them, and this was no different, This world of magic, and how it works, and all the different worlds, was just fantastic and interesting!

Eve was someone that I wanted to know more about, she was an enigma, a mystery, she didn't remember her past, or what she looked like, and yeah, that was something she had to deal with. Among other things!

Like the weird memories that she saw after she used magic. They were confusing, and they didn't make sense, and didn't come in any kind of order. And then the reveal happened, and it all came together, and finally the full picture came to light!

That the judge ordered to to die, because he didn't really see her as a separate living creature, but a possession. And that's not great thinking! Yeah that she was able to escape with her life! But she had Zack, and he was awesome!

Loved this book, so, so, so much, it was just so great! I need more Sarah Beth Durst books!