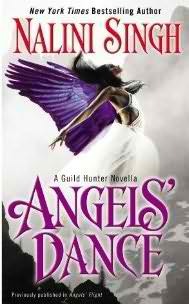 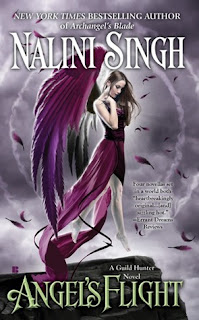 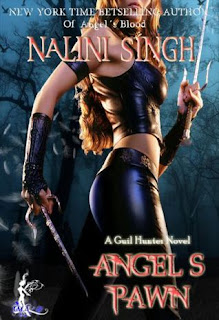 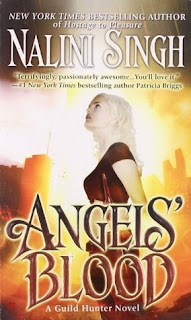 From Goodreads:
The gentle teacher of angelic young, and the keeper of her people's histories, Jessamy is respected and admired by everyone who knows her. Yet, born unable to soar into flight, she has spent thousands of years trapped in the mountain stronghold of the Refuge, her heart encased in painful loneliness...until the arrival of Galen, warrior angel from a martial court.


Rough-edged and blunt, Galen is a weapons-master at home with violence, a stranger to the sweet words it takes to woo a woman--but he is also a man determined to claim Jessamy for his own, to dance with her through the skies denied her for so very long...even if their exhilarating passion proves as dangerous as the landscape of war and unrest that lies before them.


Angels' Judgementis the compelling story of passion, love and danger in the Guild Hunter world. Sara and Deacon are Guild Hunters, their life's work is catching and capturing - or killing - rogue vampires. It's dangerous work and sometimes life or death decisions must be made in a moment. And when a judgement has to be made, should love be allowed to get in the way . . . ?

From Goodreads:
Elena's fellow Guild Hunter, the former dancer, Ashwini, once again in the South on the trail of her perpetual nemesis, the sexy vampire Janvier. He's always managed to make peace at the last minute with the angels who send her after him but they've taken each other on some pretty fun chases over the years. This time, the court of angel Nazarach, filled with cruelty and intrigue, has fallen under suspicion and Ashwini and Janvier must go in as partners to determine what really is going on. Can Ashwini keep reminding herself that getting involved with Janvier is a bad idea or will his sweet southern drawl and good looks supercede her good sense?

From Goodreads:
Vampire hunter Elena Deveraux knows she is the best- but she does not know if even she is good enough for this job. Hired by the dangerously beautiful archangel Raphael, a being so lethal that no mortal wants his attention, Elena knows failure is not an option—even if the task is impossible.

Because this time, it's not a wayward vamp she has to track. It's an archangel gone bad.

The job will put Elena in the midst of a killing spree like no other—and pull her to the razor's edge of passion. Even if the hunt does not destroy her, succumbing to Raphael’s seductive touch just might. For when archangels play, mortals break.

My Review:
I absolutely loved reading these books! I only wish that I'd learned of this series-and this author sooner! Well, I've kinda known about her since the Royal House of Shadows series, but I'd only really read it for the Gena Showalter book in the series. Yeah.

Elena was such an awesome character! There is the whole Hunter thing which wasn't fully explained, and the memories that she had, that were given to us in bits and pieces, so I can't wait to learn more about that and her past!

It's kinda of hard to believe that Angels' Blood was only the first book. Because yeah, there was a lot of action, and that ending, well, that was pretty big, and it's hard to imagine how it's going to be topped, though I know it will bit!

Such a great series, and I need to read more!