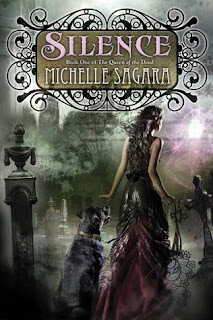 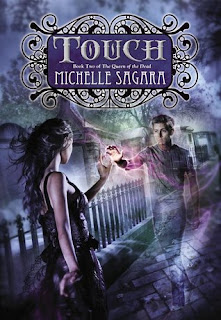 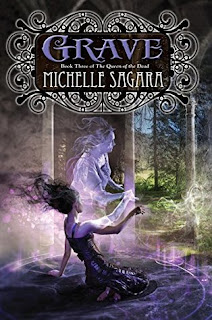 From Goodreads:
"It began in the graveyard... "
Ever since her boyfriend Nathan had died in a tragic accident, Emma had been coming to the graveyard at night. During the day she went through the motions at her prep school, in class, with her friends, but that's all it was. For Emma, life had stopped with Nathan's death. But tonight was different. Tonight Emma and her dog were not alone in the cemetery. There were two others there--Eric, who had just started at her school, and an ancient woman who looked as though she were made of rags. And when they saw Emma there, the old woman reached out to her with a grip as chilling as death....

Emma was not quite like others teenagers. It was true that other girls had experienced grief. Other girls had also lost their fathers, or had their boyfriends die in a senseless accident. But though she hadn't known it till that night in the graveyard, unlike those other girls, she could see, touch, and speak with the dead. In fact, Emma could draw upon the essence of the dead to work magic. That was what Necromancers did. But Emma had no desire to be a Necromancer. She just wanted to help the ghosts who walked the streets of Toronto, unable to escape from the land of the living. And that was just as well, because had she chosen the path of the Necromancer, Eric would have had to kill her.

Instead, Eric and his fellow Necromancer hunter Chase found themselves violating every rule they were sworn to follow, becoming part of Emma's group, helping her to stand against those who preyed upon the dead. But whether Emma and her friends could survive such a battle was anyone's guess. And whether Emma could learn to use the magic of the dead against her enemies without herself falling victim to the lure of such power remained to be seen. Eric seemed to think she could, and her living friends would never abandon her. But only time would tell what Emma's true destiny was....

From Goodreads:
Nathan died the summer before his final year in high school. But he wakes in his room—or in the shrine of his room his mother's made—confused, cold, and unable to interact with anyone or anything he sees. The only clear memory he has is a dream of a shining city and its glorious queen, but the dream fades, until he once again meets his girlfriend Emma by the side of his own grave.


Nathan wants life. He wants Emma. But, even if Emma can deliver what he desires, the cost may be too high to pay...

From Goodreads:
Grave is the concluding novel in the gripping Queen of the Dead paranormal trilogy.

Emma and her friends have survived the Necromancers sent to the city to kill them. They've gone to ground in a cottage north of the city, but time is not on their side. There are no barriers that can keep the dead out, and the dead obey their Queen. It's only a matter of time before they're found.

Nathan has been blessed by the Queen of the Dead. She has granted him a physical body. He can eat, he can breathe, he can speak and be heard. The Queen calls this resurrection. Nathan calls it Hell. The living think he's alive. He's not. He's trapped in the citadel that the Queen of the Dead calls home.

Emma wants to free him. To do that she has to survive long enough to reach the City of the Dead, and face its ancient Queen. But the city of the dead is the heart of the Queen's stronghold—and her power. Emma can't do it alone.

She's not alone. But even with hunters and her own dead at her side, what hope does she have against a woman who has lived so long, and grown so powerful, she's almost a god?

My Review:
I just absolutely loved reading this trilogy! I've loved her Chronicles of Elantra series, and yeah, reading this YA series was just fantastic! I enjoyed it so, so much, and it just makes me want more of her books!

The covers were really fantastic! They're eerie, and they represent these books so well! Like, Petal on the first book, Nathan on the second, and Emma in the circle in the 3rd and final! They were really fitting for each book! Love them!

I loved how much depth there was in these books! Like, I thought that there was something strange what with Eric's bad driving. And there's the world building, of Necromancers and ghosts, and the lantern! And Emma's relationship with her friends and with Nathan and her dad! And the complicated past that led to this present! So fascinating and complex and amazing!

There was an over 3 year gap between Touch and Grave. Which is a statement of facts, not a condemnation. Between the acknowledgments and having been watching her website blog posts, I know that Grave was a beast! The wait that I didn't have to have is totally worth it!

I just loved reading these books! They were just stunning!