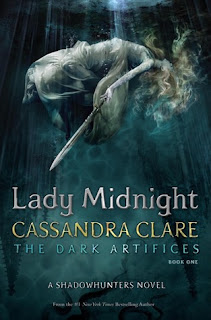 From Goodreads:
The Shadowhunters of Los Angeles star in the first novel in Cassandra Clare's newest series, The Dark Artifices, a sequel to the internationally bestselling Mortal Instruments series. Lady Midnight is a Shadowhunters novel.

It's been five years since the events of City of Heavenly Fire that brought the Shadowhunters to the brink of oblivion. Emma Carstairs is no longer a child in mourning, but a young woman bent on discovering what killed her parents and avenging her losses.

Together with her parabatai Julian Blackthorn, Emma must learn to trust her head and her heart as she investigates a demonic plot that stretches across Los Angeles, from the Sunset Strip to the enchanted sea that pounds the beaches of Santa Monica. If only her heart didn't lead her in treacherous directions…

Making things even more complicated, Julian's brother Mark—who was captured by the faeries five years ago—has been returned as a bargaining chip. The faeries are desperate to find out who is murdering their kind—and they need the Shadowhunters' help to do it. But time works differently in faerie, so Mark has barely aged and doesn't recognize his family. Can he ever truly return to them? Will the faeries really allow it?

My Review:
I've been meaning to read this book forever! By which I mean since it came out. But now that the 3rd book is coming out soon, and given how long it took me to read this book, and applying it to reading Lord of Shadows, well, it means that I won't want to wait, which is pretty great!

I really enjoyed reading about Emma and Julian. We've met them previously, but they were just kids then, and now they're teens, almost adults, and they're the stars of the series. I really enjoyed being in their heads, they've gone through a lot, and still have much more coming!

There was so much going on with this book. There was the investigation into the faeries being killed, there was everything brought up with Mark being back. There was whatever Julian was keeping hidden. And they all wove pretty seamlessly together!

Loved this book so much, it was so freaking great, and I can't wait to read more!