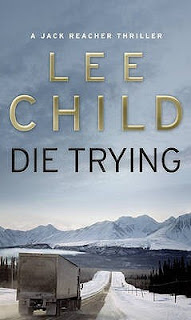 From Goodreads:
A Chicago street in bright sunshine. Jack Reacher, strolling nowhere, meets an attractive young woman, limping, struggling with her crutches, alone. Naturally he stops to offer her a steadying arm and then they turn together—to face twin handguns held level and motionless and aimed straight at their stomachs.

Chained to the woman, locked in a dark, stifling van racing 2,000 miles across America, Reacher needs to know who he's dealing with. The kidnappers are saying nothing and his companion claims to be Holly Johnson, FBI agent. She's fierce enough and tough enough, but he knows there must be more to her than that. And at their remote, hostile destination, they will need to act as a team and trust each other, pitting raw courage and cunning against insane violence and seemingly hopeless odds, with their own lives and hundreds more at stake.

Why the time hasn't come yet...
It's been a long time since I read the first book, so I'm going to have to read it again before I read this book. Hopefully that happens soon! What about you guys? Happy reading!
Posted by Louisa @ Words I Write Crazy at 6:00 AM