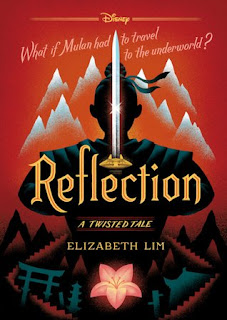 From Goodreads:
What if Mulan had to travel to the Underworld?
When Captain Shang is mortally wounded by Shan Yu in battle, Mulan must travel to the Underworld, Diyu, in order to save him from certain death. But King Yama, the ruler of Diyu, is not willing to give Shang up easily. With the help of Shang's great lion guardian ShiShi, Mulan must traverse Diyu to find Shang's spirit, face harrowing obstacles, and leave by sunrise--or become King Yama's prisoner forever. Moreover, Mulan is still disguised as the soldier called Ping, wrestling with the decision to reveal her true identity to her closest friend. Will Mulan be able to save Shang before it's too late? Will he ever be able to trust her again? Or will she lose him--and be lost in the Underworld--forever?

My Review:
I really enjoyed reading this book! Mulan is a favourite of my Disney princesses movies, and this retelling was so fantastic, and such great depth, yeah, this book was totally different from the movie. I mean, Shang was the one that got hurt instead of Mulan, and he basically died! That's kinda huge!

Going into the Underworld, yeah, that's not even a thought in the movie, because Mulan, I guess, wasn't as severely injured. So it was so great to learn more about their families, and their after-life, I don't know how much was drawn from myths and legends and such, but yeah, it was so great to read!

There were some really great characters in this book, I loved ShiShi, Shang's guardian. He was so hilarious! And I loved the members of the Fa family that we met, they weren't good-goody two shoes, they had some some bad things in life that they had to make up. They were so great to read about!

This book was so fantastic, and I enjoyed it so much!