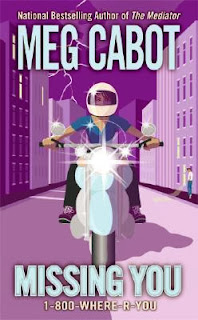 My first review of Missing You
My Review:
Yeah! I loved reading this book again, I wasn't planning on it, but then I had an urge to, so yeah, I read it. I wasn't feeling well, so I wanted comfort, and I turned to this book, a nice quick read that was so enjoyable, and that I could finish quickly and then go to sleep. It worked perfectly!

I had remembered the main plot points (well, besides the school and the two options it could become) but not the little details, which were the ones that fully flesh out a book. That make it interesting to read, and were just so great to read again!

Jess and Rob have been on a heck of a roller coaster ride. They had a long time to become a couple, and then she went to help with the war, and came back and there was the big misunderstanding. I'm glad that they finally worked everything out!

Now that I'm older, all the words in capital letters seems a little extreme. Like, couldn't the words be emphasized using italics or something instead of capital letters? It feels weird criticizing a book that I really enjoyed, but every reading experience is different, because you're different!

This book was just so freaking great to read again! Loved that I did so!