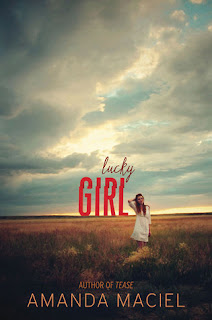 From Goodreads:
Lucky Girl is an unflinching exploration of beauty, self-worth, and sexual assault, from the author of the acclaimed Tease.

My Review:
I enjoyed reading this book. It was a great book about friendship and about sexual assault, and how one can affect the other. Rosie had to deal with her ex assaulting her-come to the terms that it was assault-and growing up and figuring out what matters in life. Because she always was the pretty one, and now, that doesn't mean much to her.

So I really enjoyed her first book, Tease, because the main character was flawed and had made mistakes, and was a book that made you think about the issues. This book did the same, which was really great, we'll need books about sexual assault until a) it stops happening, and b) everybody has healed from it. And even then, we'll need books like this to keep it from happening again. So this is a good step!

Rosie and Alex, I wanted to read about them, but I also wanted to cringe away, because they were so awkward, and I have a hard time with awkward, because I don't want to be that, myself, though I can't help myself sometimes. But they were really cute together, and I really enjoyed their relationship!

One big part of this book was her friendship-or temporary breaking of-with Maddie. Because Maddie was interested in Rosie's ex, and when she walked in on them and made the wrong assumptions, that messed things up. Though they were a little wrong earlier, what with Rosie being jealous of Maddie. I was so glad that they worked things out!

This book was a really great read, and I really enjoyed it!