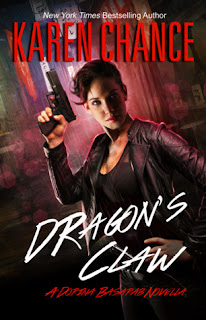 My Review:
I love reading about Dory! And the fact that a) we're getting two stories that have a linked plot, and b) Dory and Pritkin meet, yeah, I was really excited about this book! And it didn't disappoint, it was a hilarious, non-stop read! I loved it!

One thing that I both love and hate about Karen Chance's writing (at least in the two series she currently does in the same world) is there's so much action and I don't have any idea really why what they're doing is helping, or what the heck is going on. When it's explained later, it makes sense, that ahh, moment. But during the action, it's the what the heck?

There were two bits of magic that I really enjoyed in this book. The first was the anchored city of Magical Hong Kong, and the graffiti. Oh, yes, the graffiti. That caused me to laugh so much, it was just hilarious!

That ending was a pretty drawn out battle! And this was only one half of it, which is saying something! But that ending was a bit sad, because there was that loss there, but that bad guy had to be taken down. Still sucks about the cost!

I loved reading this story so much, it's so great, and I can't wait for Pritkin's story!