Week 37 Reviews: The Captain of All Pleasures, The Price of Pleasure 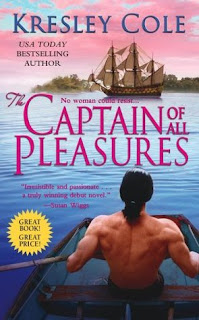 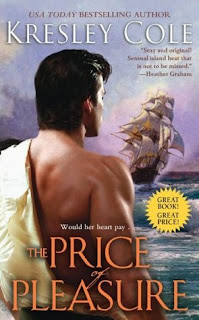 From Goodreads:
In her exhilarating debut novel, Kresley Cole captures the drama, passion, and boundless adventure of the high seas—as one fiery lass finds herself caught in a tide of torrid romance.

Raised as a free spirit aboard her American sea captain father's majestic clipper ship, willful Nicole Lassiter has never encountered an obstacle she couldn't overcome—until she meets Captain Derek Sutherland. His sizzling kisses leave her longing, but after they share a night of passion, his subsequent disdain makes her blood boil. Nicole vows to take her revenge—by helping her father beat Sutherland in a high-stakes competition: the Great Circle Race from England to Australia.

Nicole's scheme is thrown overboard after her father is wrongly imprisoned, yet she remains undaunted—taking to the high seas with her father's ship. But a storm wrecks her plans, and she finds herself a virtual prisoner aboard Sutherland's vessel. And while her mind tells her she should escape, her body urges her to surrender.

From Goodreads:
Kresley Cole returns with a breathtaking romantic saga of love, honor, and passion unbound—as a man of duty faces his greatest trial, and a young castaway discovers her greatest desire...

A man noted for his courage and integrity, Captain Grant Sutherland journeys to Oceania to find Victoria Dearbourne, an English girl lost at sea a decade before. He's given her ailing grandfather his word—as a gentleman—to find and protect her. But one look at a grown Victoria, and Grant has never felt less like one.

Tori relishes freedom, untamed passion, and spontaneity above stifling order. Even more so when a proud, cold British captain arrives to rescue her, though she has no wish to be. As Grant tries to convince her to leave her island home, she begins to see in him a man hungering for more. A man who once laughed. A man who desires her but won't take what she offers.

My Review:
These books were both so amazing to read! I loved these characters, they were all pretty headstrong, and they have plenty of adventures along the way! And they were just so freaking hilarious, it was a blast to read them!

Nicole and Derek were really great to read about! They both have high stakes in the race, and while all these things were going wrong, I really enjoyed watching their interactions! It was so hilarious, though there were some tough moments!

Because of circumstances between Derek and Grant and their birth order, and suck, they basically switch lives between the first and second book, Derek taking over the land, and Grant the sea. There's some emotions to deal with, but it all works out, which was great to read!

Such a great duo of books, and I enjoyed reading them so much!

Author: Lynsay Sands
Series: Sutherland Brothers #1, 2
Read: September 13th, 13th, 2018
Source: Ebook.bike
Reason Why: Love her writing, and they're Historical Fiction 2018 Books and Prequel & Sequel Challenge 2018 Books! And The Captain of All Pleasures is a WTC Book, and The Price of Pleasure is a End of Series 2018 Book!
Publisher: Pocket Books
Published: June 1st 2003, June 29th 2004

The Captain of All Pleasures:

The Price of Pleasure: