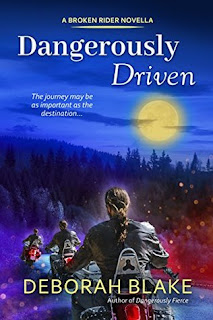 From Goodreads:
The Riders…three legendary brothers who were born to aid the Baba Yagas, until tragedy changed everything. Separated by guilt and circumstance, they will finally have a chance to come back together. But what will happen when they do?

Neither Mikhail, Alexei, nor Gregori are enthusiastic about the invitation to join the three Baba Yagas at Bella's home in the Wyoming woods. But Bella and her apprentice Jazz have just spent a year in the Otherworld after Jazz's disastrous attempt to cure the Riders' loss of their immortality, so it isn't really a summons any of them can refuse. As much as they might wish they could.

Each brother has his own reason to feel guilty, and they all mourn what they have lost despite having built themselves rewarding new lives. None of them is quite ready for a reunion. But they no longer have all the time in the world. So they get on their enchanted steeds (now a black Harley, a red Ducati, and a white Yamaha) and head out across the country, never expecting the adventures that lie ahead.

The brothers travel different roads to get to Wyoming, but they all end up on the same path. A surprise visit from an old friend might just show them that the journey is more important than the destination…especially when you travel it with those you love.

My Review:
I really enjoyed this story! We got to see all 3 brothers come together, see them all face situations that mimic their self-perceived biggest mistakes, and I really enjoyed how they dealt with everything! It was a great, amazing story!

It was just really great to bring these brothers back together, they've all healed a lot in their individual books, but they haven't been all back together since they were captured. This was the last bit of their healing that they could actively do, vs. maintaining what they'd already achieved.

All three brothers were anxious about the idea that the other two wouldn't come, and that their partners usually thought that they would, it was something of a running gag, and was fun to read. The emotions behind it was real, but it was a nice fun part of this book!

They all have issues from the events that we've read about. And they face them in this book, and it turns out that they were tests for the brothers, and I'm really glad that they all passed, given the results of those wins. They deserved it!

Really enjoyed this book, and I wouldn't mind more from this series or the Baba Yaga series!