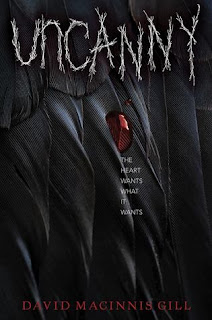 From Goodreads:
A chilling stand-alone novel by the acclaimed David Macinnis Gill. This original and sinister spin on gothic tradition will appeal to fans of Asylum, American Horror Story: Coven, and The Walking Dead.

When a bolt of lightning causes a Boston-wide blackout on her sixteenth birthday, Willow Jane doesn't think anything of it—until she begins stopping time, until she comes face-to-face with her menacing familiar, until her sister disappears.

But these aren't the only strange and horrifying things to come out of the storm. An ancient witch named the Shadowless has awoken and escaped from her crypt, and she's looking for revenge on Willow Jane's family.

From the critically acclaimed author of Black Hole Sun and Soul Enchilada, this eerie horror story lingers long after its bloody end, and is perfect for fans of Madeleine Roux, The Ghost Files, and anyone who likes things that go bump in the night.

My Review:
This book was very weird. I would read the first few pages, just not get hooked, and later come back and start over. This happened a few times. But once I really got into it, I was really interested in the weirdness and wanted to know more about this world!

For me, this book had a slow burning beginning, but the heat is really on in the end! We were slowly introduced to this world, and its strangeness, and while we didn't see everything, because it was a whole maze of confusion for me, but once enough of the ground rules were established, yeah, it flew by!

The Shadowglass was pretty terrifying. I mean, she survived being buried for at least a century. Anything that can do that, you be wary of. And that she was able to control various people, well, that just makes it harder, because its not their fault, they're innocent and you don't want to hurt them, but you don't want to be hurt by them, you know?

That ending was pretty awesome and heart-pounding! It didn't end with a happily ever after, there was some cost to their victory, but it was well earned and a really satisfying ending! Though I'm still left uneasy about it, I'm glad that it wasn't me!

This book was strange and enjoyable and I'm still not quite sure what I read. I enjoyed it so much!