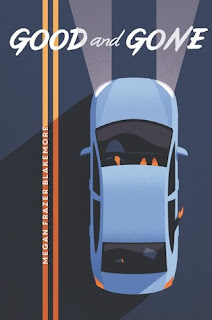 From Goodreads:
Honest and emotionally charged, Good and Gone is the story of a teenage girl who must find her way back to herself as she grapples with the truth of what her boyfriend did to her. A gripping YA that will appeal to fans of Jandy Nelson and Sara Zarr.

When Lexi Green's older brother, Charlie, starts plotting a road trip to find a famous musician who's been reported missing, she’s beyond confused. Her brother hasn't left the couch since his girlfriend broke up with him months ago—but he'll hop in a car to find some hipster rocker? Concerned at how he seems to be rebounding, Lexi decides to go along for the ride.

Besides, Lexi could use the distraction. The anger and bewilderment coursing through her after getting dumped by her pretentious boyfriend Seth has left her on edge. As Lexi, Charlie, and their neighbor Zack hit the road, Lexi recalls bits and pieces of her short-lived romance and sees, for the first time, what it really was: a one-sided, cold-hearted manipulation game. Not only did Seth completely isolate her, but he took something she wasn't ready to give up.

The further along in their journey they get, the three uncover much more than empty clues about a reclusive rocker's whereabouts. Instead, what starts off as a car ride turns into something deeper as each of them faces questions they have been avoiding for too long. Like the real reason Charlie has been so withdrawn lately. What Seth stole from Lexi in the pool house. And if shattered girls can ever put themselves back together again.

My Review:
Yeah, this book was really interesting to read. I have a harder time with contemporary books because the conflict is usually internal or the relationships with other people, not always the romantic ones. I did take a longer time to read this book given its shorter length, but I did enjoy it!

So Charlie deals with depression, though its more shown then outright stated. And this trip was a break from the pattern that he'd been in, and going out on the road looking for the missing musician. While he and Lexi did have some sharper comments for each other, they both wanted the other to be happy and healthy, though Charlie didn't realize he needed to worry about Lexi at first.

Lexi was angry. She'd been dating Seth, and then we slowly saw what happened between them. And that Charlie was too entrenched in his issues to notice her own, and that caused some tension between the two of them. I'm glad that they worked it out!

I really enjoyed the investigation that they made looking for the singer, it took them from place to place, and allowed them time to heal, to learn more about themselves. And that ending with the note, yeah, that worked well with this book!

Yeah, this book was a great look into some issues without being preachy or in your face and I enjoyed it!