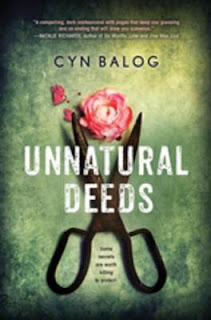 From Goodreads:
A novel of infatuation and obsession, Unnatural Deeds has an electrifying ending that readers won't see coming.

Victoria Zell doesn't fit in, not that she cares what anyone thinks. She and her homeschooled boyfriend, Andrew, are inseparable. All they need is each other. That is, until Zachary Zimmerman joins her homeroom. Within an hour of meeting, he convinces good-girl Vic to cut class. And she can't get enough of that rush.

Despite Vic's loyalty to Andrew, she finds her life slowly entwining with Z's. Soon she's lying to everyone she knows in an effort to unravel Z's secrets. Except Z's not the only one with a past. Victoria's hiding her own secrets, secrets that will come back to haunt her...and destroy everything in her path.

My Review:
This book was so creepy and different and great! The beginning set things up to make me/us think that things were one way, and so when the big twist comes, it's a total surprise! That was just so wonderful to read!

I really enjoyed the way this book was set up, with interviews and such from the present, and then having the story move closer and closer to the present, starting around the start of school. We knew that something bad was going to happen, and we kept getting hints and details of what it was, but when it came and we got the full story, wow! Just so great!

I just absolutely loved when we learned what had happened, what Victoria's secrets were. That her boyfriend was dead, and killed himself years ago, but she has a version of him inside her head that's still alive, yeah, that was such a surprising twist! And it ended so well! Loved it!

Loved reading this book, it was so fantastic!