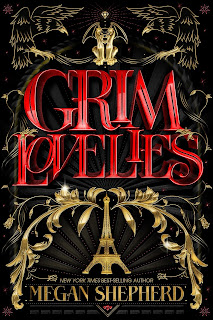 From Goodreads:
Seventeen-year-old Anouk envies the human world, where people known as Pretties lavish themselves in fast cars, high fashion, and have the freedom to fall in love. But Anouk can never have those things, because she is not really human. Enchanted from animal to human girl and forbidden to venture beyond her familiar Parisian prison, Anouk is a Beastie: destined for a life surrounded by dust bunnies and cinders serving Mada Vittora, the evil witch who spelled her into existence. That is, until one day she finds her mistress murdered in a pool of blood—and Anouk is accused of the crime.

Now, the world she always dreamed of is rife with danger. Pursued through Paris by the underground magical society known as the Haute, Anouk and her fellow Beasties only have three days to find the real killer before the spell keeping them human fades away. If they fail, they will lose the only lives they've ever known…but if they succeed, they could be more powerful than anyone ever bargained for.

From New York Times bestselling author Megan Shepherd, Grim Lovelies is an epic and glittering YA fantasy. Prepare to be spellbound by the world of Grim Lovelies, where secrets have been long buried, friends can become enemies, and everything—especially humanity—comes at a price.

My Review:
This book was so fantastic! I'd been reading it, a few pages at the time, but then I hit a point and I couldn't put it down! And that had excellent timing, because Midnight Beauties comes out next week, so I don't have to wait for it! So I'm very happy!

Anouk and the other beasties are slaves. The name isn't used, they aren't paid for their work, and they can't do anything else. There's no physical chains keeping them there, but Mada Vittora has their pelts, which is why they can't leave. And Anouk didn't know any better. Until Vittora was murdered and they go on this adventure.

Anouk learned about herself in this book, that she was strong, and deserved more in life then what she was getting. I really enjoyed watching her on this journey-even if there was a count down until they were turned back into animals, well, that just put pressure on everything.

I really enjoyed spending time in this world with magic and goblins and witches and Royals. And of course beasties. It was so interesting, and with what we learned in this book, and what Anouk's intentions at the end, well, I can't wait to see where things are going to go from here!

This book was so excellent, and I can't wait to see how things are going to go in the sequel!