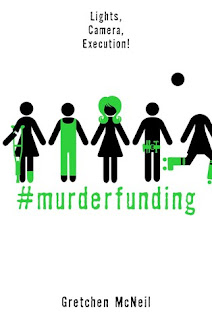 From Goodreads:
WELCOME TO WHO WANTS TO BE A PANIAC?, the latest reality TV show on the hunt for the next big-hit serial killer. But don't worry—no one is actually going to murder anyone, as real as the fake gore and pretend murder may appear . . . uh, right?

Seventeen-year-old Becca Martinello is about to find out. When her perfectly normal soccer mom dies in a car crash, a strange girl named Stef appears to let Becca know that her deceased mom was none other than one of Alcatraz 2.0’s most popular serial killers—Molly Mauler. Soon, Becca ends up on Who Wants to Be a Painiac? to learn the truth about her mom's connection to Molly Mauler, but things turn sinister when people are murdered IRL. Will Becca uncover dark secrets and make it out of the deadly reality show alive? Or will she get cut?

My Review:
Wow, I really enjoyed this book! I really loved the first book, and I wanted to know what was going to happen next! And yeah, it was a pretty fantastic book! One thing that I wasn't expecting, was that we got some scenes from Dee's perspective, which was pretty great! Loved how the two stories came together!

I love this cover, because I can tell who is who. Like Becca and Stef are the middle girl and the one without her head. Then there's Coop with the tool belt, and how his personal is John Carpenter, Actual Carpenter. Then there's Lars in the unitard. And I was confused as to who the last person was, if she was Fiona, but realized, no, that's Dee, who had her leg damaged in the last book. So that's pretty great!

It's not quite as action packed as the first one. After all, there's the set up about the show and then getting there, whereas the first book, started straight off with Dee facing a Painiac. There is a part of this book that just trying to survive and get the heck out of the building, though!

Honestly, I could have a 3rd book in this series. While this book wraps up pretty much all of the plot points that were left hanging in the first, Becca makes a vow that the people who did this would pay. So for me, that kinda opens things up for another book!

Loved this book and it was a really fantastic read!