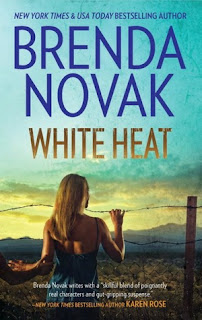 From Goodreads:
A dangerous cult has recently taken over the desert ghost town of Paradise, Arizona. Members worship at the feet—and in the bed—of its charismatic leader, Ethan Wycliff, and obey his orders blindly. They've already tried to murder one woman and they're implicated in the disappearance of another.

Nate Ferrentino, who works for private security contractor Department 6, has been assigned to infiltrate this group. It's a challenge he welcomes—until he learns that colleague Rachel Jessop will be going undercoverwith him. Thanks to their shared history, he'd much rather go alone….

The problem is, only married couples can participate in cult rituals. So, like it or not—and they don't—Rachel and Nate must pretend to be husband and wife.

There's no choice. Because if Wycliff isn't exposed, if he isn't stopped, more people will die. And Rachel might be one of them.

From Goodreads:
Twelve people have been shot at point-blank range and left to rot in the desert sun. It's Sophia St. Claire's job to do something about it. She's Bordertown, Arizona's new chief of police—and she's out of her depth.

Help arrives in the form of Department 6 hired gun Roderick Guerrero. As far as Sophia's concerned, his involvement only makes things worse. Maybe he's managed to turn his life around. And maybe he's a good investigator. But as the bastard son of a wealthy local rancher, he has a history he can't get past. A history that includes her.

Rod refuses to leave town until the killer is caught. He's not worried about the danger posed by some vigilante. It's Sophia who threatens him. Because he's used to risking his life—but his heart is another story.

My Review:
These are 2 really excellent murder mystery books! So many little clues, details, that are really cool to piece together, and to figure out the mystery! Loved them!

I loved all the little clues mostly in Body Heat, because in White Heat, they already knew the bad guy from the get-go. So I enjoyed Body Heat more, but you should still read White Heat, because then you can see more of Rachel and  Nate! Loved the ending of both books, but something in the ending of White Heat wasn't mentioned in Body Heat, and I would have expected it to be mentioned, because from little details, it was about 6 months later...yeah.

And the romance? Deep, and fought against, but just the best! I loved how they both, in their each way, each couple has a journey to overcome the past, old incidents that happened, and now they're together...I really liked that! Conflict makes things stronger!

These were 2 really good books (and expect a review of Killer Heat next week!) that I really enjoyed, so check Brenda Novak's writing out!