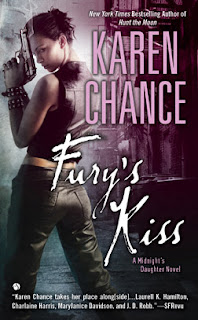 From Goodreads:
Dorina Basarab is a dhampir—half-human, half-vampire. Subject to uncontrollable rages, most dhampirs live very short, very violent lives. But so far, Dory has managed to maintain her sanity by unleashing her anger on those demons and vampires who deserve killing...

Dory is used to fighting hard and nasty. So when she wakes up in a strange scientific lab with a strange man standing over her, her first instinct is to take his head off. Luckily, the man is actually the master vampire Louis-Cesare, so he's not an easy kill.

It turns out that Dory had been working with a Vampire Senate task force on the smuggling of magical items and weaponry out of Faerie when she was captured and brought to the lab. But when Louis-Cesare rescues her, she has no memory of what happened to her.

To find out what was done to her—and who is behind it—Dory will have to face off with fallen angels, the maddest of mad scientists, and a new breed of vampires that are far worse than undead…

My Review:
Ah, this book was just so fantastic! I loved reading it, and yeah, it was a great addition to the series! There was just so much going on in this book, that it got a bit confusing, but since it was the same for Dory, what with the big thing in this book, yeah. Which is mostly what I want to talk about.

The big thing being? That Dory has a fully vampire side Dorina, who's been hidden in her mind because her dad did so, to protect her. And she's been coming out. And we saw some of that, but it was disjointed, so it was hard to make sense of. And this whole thing complicates her relationship with her dad, because part of what he messed with to do this, is time that she spend with him when she was young. And right now, it's pretty much gone.

And the bonus for Dory having a vampire side? Seeing as Dorina is the same age as Dory, she's a master vamp. So she can, and is, put on the vampire counsel! So yeah, that's a pretty big (I want to use the swear word, because it fits here, but I'll say effing) deal!

The last thing, is a small thing, but really hilarious. When they went to go see Radu, and Ray was
all, "Die, die, die!" And they have to go see who he's talking to. And it turns out, that he's talking to the air conditioner! Just so bizarre!

This was such a fantastic book, and I really can't wait for the next book!