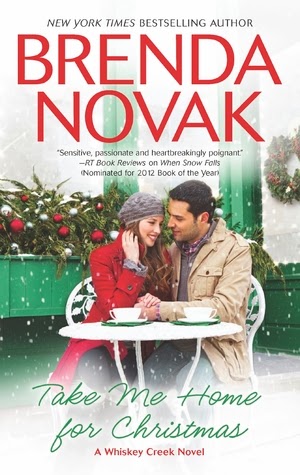 From Goodreads:
Christmas is a time for remembering….

Too bad all memories aren't pleasant. Everyone in Whiskey Creek remembers Sophia DeBussi as the town's Mean Girl. Especially Ted Dixon, whose love she once scorned.

But Sophia has paid the price for her youthful transgressions. The man she did marry was rich and powerful but abusive. So when he goes missing, she secretly hopes he'll never come back—until she learns that he died running from an FBI probe of his investment firm. Not only has he left Sophia penniless, he's left her to face all the townspeople he cheated….

Sophia is reduced to looking for any kind of work to pay the bills and support her daughter. With no other options, she becomes housekeeper for none other than Ted, now a successful suspense writer. He can't bring himself to turn his back on her, not at Christmas, but he refuses to get emotionally involved. He learned his lesson the last time.

Or will the season of love and forgiveness give them both another chance at happiness?

My Review:
So this was a really fantastic book! People didn't really like Sophia in the previous books, seeing how she treated Ted when she was a teen. But that doesn't mean that she's a bad person. And in this book, we get her story. And it's great!

The fact that Ted was dating Eve for a good portion of the book made me a bit worried that him and Sophia wouldn't end up together. But it ends really well, and yeah, I really enjoyed that, they built themselves a good relationship!

I was kinda glad that her husband died, he was abusive. But he left behind the lies and debts for Sophia to deal with, and that wasn't fun, having people loot her house, basically. Loved when the police dude asked for a check, and was told only those that hadn't looted her house would get a check. And how his actions ended up him getting fired. Which is good, I didn't like him in the previous book, and he proved what a not-nice guy he was here!

Really great book, a great instalment in this series, and I really want more, because Eve, Joe, Kyle and Riley need to get HEA's!