Yeah, we have the cover (and the title) of The Life Below by Alexandra Monir! 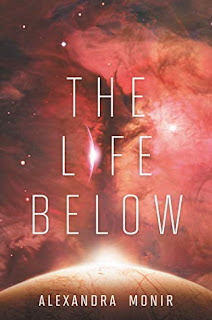 From Goodreads:
As Naomi lifts off into space and away from a rapidly deteriorating Earth, she watches the world fade away, and along with it Leo, a Final Six contestant she grew close to during training. Leaving Earth behind is hard, but what’s ahead, on Europa, could be worse. The International Space Training Camp continues to hide the truth about what happened to the last group of astronauts who attempted a similar colonization but failed mysteriously. With one shot—at this mission and to Europa—Naomi is determined to find out if there is alien life on Europa before she and her crew get there.

Leo, back on Earth, has been working with renegade scientist Dr. Greta Wagner, who promises to fly him to space where he can essentially latch on to Naomi’s ship. And if Wagner’s hypothesis is right, it isn’t a possibility of coming in contact with extraterrestrial life on Europa—it’s a definite. With Naomi unaware of what awaits, it’s up to Leo to find and warn her and the others.


Yeah, this cover is pretty beautiful and the sky background goes well as a cover theme, and I can't wait to read this book! So excited to read it! What about you guys? Happy reading!
Posted by Louisa @ Words I Write Crazy at 7:30 AM