Week 26 Review: The Eyes of Tamburah 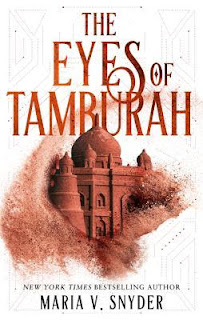 Shyla is a researcher who resides in the underground desert city of Zirdai, which is ruled by the wealthy Water Prince and brutal Heliacal Priestess. Even though Shyla is sun-kissed - an outcast, considered cursed by the Sun Goddess - she is still renowned for uncovering innumerable archaic facts, lost artefacts, ancient maps, and obscure historical documents. Her quiet life is about to change when Banqui, an archaeologist, enlists her services to find The Eyes of Tamburah: legendary gemstones that bestows great magic to its wielder. These ancient objects can tip the balance of power and give whoever possesses them complete control of the city.

But chaos erupts when The Eyes are stolen soon after they're found - and Shyla is blamed for the theft. Forced to flee, with the Prince's soldiers and the Priestess' deacons on her trail, Shyla must recover the jewels and clear her name. A quest that will unearth secrets even more valuable than The Eyes of Tamburah themselves...

My Review:
Oh, wow, I wasn't sure what to expect from this book, but wow, was it so fantastic! This world was so incredible and detailed and I can't wait to explore more of it! And the characters, wow, Shyla with her logical ways and stubbornness!

I feel a little bit silly, that I was surprised there was only 2 eyes. I kinda thought that it wasn't quite literal, that there were a number of different gems that where his "eyes." I don't know why I thought that way. My brain is weird!

This book had so many elements to it. From the investigation into the Invisible Sword group, to the adventures she has on the various levels, mostly trying to get from one level to the next. There's a slight romance, but it's not a focus.

There's a ton of unfairness in this book. Like the sun kissed, those people who are blond, are left on the surface to die as babies. And the Priestess and the Prince, yeah, they both are pretty horrible, though in the beginning I had the idea he could be a love interest. Yeah, that's not going to happen! Especially with the black river!

There were so many secrets, about magic, about the group called the Invisible Sword, about her former home in the monastery, about the city that she calls home. This book was the start of change for them all, but they have a long road ahead of them, Shyla listed out her tasks, and boy, they're a doozy, but I think she can accomplish them!

Loved this book so much, and I can't wait for more! This series is going to be so fantastic!