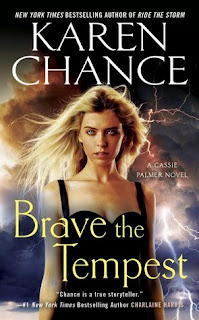 From Goodreads:
Cassie Palmer, chief seer of the supernatural world, faces her biggest challenge yet--her own allies! Everything's on the line in the latest thrilling entry in the New York Times bestselling urban fantasy series.

Cassie Palmer has been chief seer of the supernatural world for a little over four months. In that time, she's battled two gods, fallen in love with two men, and confronted the two sides of her own nature, both god and human. So it's not surprising that she currently finds herself facing two adversaries, although they have a single purpose: to wipe out the supernatural community's newest fighting force, leaving it vulnerable to enemies in this world and beyond.

To prevent catastrophe, the vamps, mages, and demons will have to do the one thing they've never managed before and come together as allies. Cassie has the difficult task of keeping the uneasy coalition intact, and of persuading her own two opposing forces, a powerful mage with a secret and a master vampire with a growing obsession, to fight at her side. She just hopes they can do it without tearing each other apart.

My Review:
Wow, another amazing book! I love these adventures were you never know what's going to happen and are just wild and out of control crazy! They're wild rides that I love getting on and only get off to let my head get used to them!

After 2 books of desperately trying to get the counter spell applied to Pritkin to keep him from permanently dying, it was like a sigh of relief. But there's still a war going on, and of course Cassie's life is just crazy, but that's just things going back to normal without that added pressure!

Of course, we learn more about the Pythian power. And in the worst possible ways, at the worst times, like when they're fighting for their lives. While that could be helpful, well, since she doesn't know what's going on, and how to use it, it's not. But it makes for entertaining reading! We also learn more about Pythian courts, since Cassie is slowly building her own, figuring out what she wants for it.

One thing that you should know, is that the events of the last 3 short stories-Lovers Knot, Dragon's Claw and Siren's Song, with the last two happening around the same time, they're mentioned in this book. So it'd be a good idea to have read them ahead of time. They're not major plot points, and things make sense without reading them, but they are great reads! Well, I'd think Siren's Song will be, but it isn't quite out yet, but I know it's going to be good!

This book is something of a turning point in the war. They're coming up on a time when Earth time is going faster than Faerie, which won't happen for another 10 years. Cassie finds she has to make some hard choices as she faces off with Jo and learns more about Jonathan's plans. We're reaching the end here, though we still haven't caught up with the Lia stories or Tomas's story! Though we're finally, finally, leaving summer and entering fall!

Yeah, this book was so absolutely fantastic and while I'm sad that while this series won't be traditionally published from now on, I'm so glad that we're getting the next book, Shatter the Earth, in December!