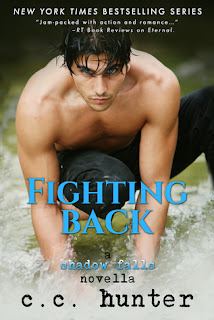 From Goodreads:
Everything is changing, and Kylie's not sure how to feel about it. It's her senior year at Shadow Falls, but her boyfriend, Lucas Parker, has already graduated and has new responsibilities with the werewolf council. When he breaks a promise to her and leaves on a two-week mission for his pack, she starts to worry that their love just isn't strong enough to stand the test of time.

While still devastated by his absence and the emotional distance that's grown between them, Kylie's visited by a new spirit with a vague but urgent message: "Save him." The spectral visits are unsettling and confounding, but when Kylie discovers the ghost's connection to Lucas, she becomes terrified. Lucas is the one she needs to save. While their future may still be uncertain, Kylie will do whatever it takes to save the life of the only boy she's ever truly loved.

My Review:
Yeah, we got more time to spend with Kylie and Lucas! And we got to spend some time in Lucas' head, which is something we haven't had before! And of course they're facing difficulties or it wouldn't be a very entertaining read, would it? But it was kinda hard to have them face conflict again!

The werewolf council is being a pain in the rear, sucking up all of Lucas' free time that he could've spend with Kylie. Kylie being Kylie, not one for negativity, even if it means bottling up her emotions, well, it's understandable, but it led to a bit more drama then had to happen otherwise.

This is a novella, so it was a pretty fast read. I would've liked a bit more of a conclusion about where they're going to go in the future with the council, because honestly, I was like, OK, let's just make 2, and have one for the older, stiffer werewolves who only are the leaders of like-minded werewolves, and then a younger council for the new generation who were chafing at the bit at the lack of change. But that's fantasy, not what would really happen, and I want to know how they were going to deal with everything, not just renewed hope for the future!

One thing that I don't get is, why doesn't Kylie learn to fight as different supernatural species? Like, I know she only has the power of a Protector when she's protecting someone, but can't use it for herself. So why can't she use her vampire or werewolf strength to fight for herself? Sure, she'd have to learn how, but she'd be a whole lot safer!

Really enjoyed this story, it was such a great read!