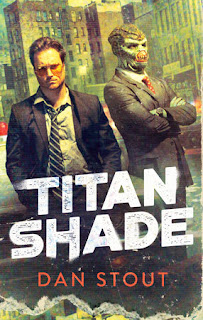 From Goodreads:
This noir fantasy thriller from a debut author introduces the gritty town of Titanshade, where danger lurks around every corner.

Carter's a homicide cop in Titanshade, an oil boomtown where 8-tracks are state of the art, disco rules the radio, and all the best sorcerers wear designer labels. It's also a metropolis teetering on the edge of disaster. As its oil reserves run dry, the city's future hangs on a possible investment from the reclusive amphibians known as Squibs.

But now negotiations have been derailed by the horrific murder of a Squib diplomat. The pressure's never been higher to make a quick arrest, even as Carter's investigation leads him into conflict with the city's elite. Undermined by corrupt coworkers and falsified evidence, and with a suspect list that includes power-hungry politicians, oil magnates, and mad scientists, Carter must find the killer before the investigation turns into a witch-hunt and those closest to him pay the ultimate price on the filthy streets of Titanshade.

My Review:
Wow, this book was pretty fantastic! I enjoyed the world so much, it was different and fascinating with the different species like Squibs and Mollenkampi, like the one figure on the cover. And that's just the backdrop to the whole murder case that Carter is investigating. Carter, who has to hide from the public eye.

Titanshade, while being the setting, was a pretty important piece of this book. Because of the oil fields that were the reason for it becoming an important town drying up, that's why the murder is such a big deal. Because they're trying to broker a deal with the Squibs. So there's plenty of politics, as well as how strange the town is, in the middle of ice fields and being heated by thermal vents.

Carter is basically a pariah with the other cops and it's because of an unfortunate incident that happened when he was a rookie. He's an excellent detective but without the patience to be politic. I really enjoyed the way that his mind worked! And his partnership with Ajax, that was so great because Ajax is a rookie and new to town, and they had an interesting and fun to read about dynamic!

There were a few cases going on that were pretty interesting. They were both pretty brutal murders, but they were are different spectrum of victims, the first was high profile, while the other was devastating, didn't have potential city-wide ramifications. And when they were solved, man, that was interesting and that ending is going to change the world and I can't wait for more!

Besides the different races, there were also things like manna, a magical substance that they've pretty much run out of, that I hope we'll learn more of. And there's this one lady that we met, and her superior, that I really hope we'll see more of because yeah, they were really fascinating and a bit scary!

There are many strange and wondrous things in this world and I can't wait to explore them in future books!