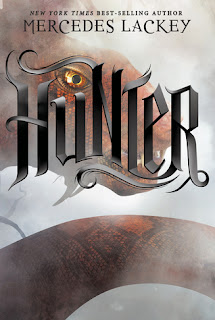 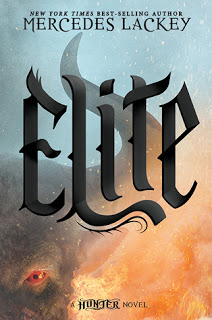 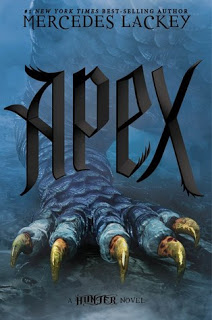 From Goodreads:
Centuries ago, the barriers between our world and the Otherworld were slashed open allowing hideous fantastical monsters to wreak havoc; destroying entire cities in their wake. Now, people must live in enclosed communities, behind walls that keep them safe from the evil creatures constantly trying to break in. Only the corps of teen Hunters with lightning reflexes and magical abilities can protect the populace from the daily attacks.

Joyeaux Charmand is a mountain girl from a close knit village who comes to the big city to join the Hunters. Joy thinks she is only there to perform her civic duty and protect the capitol Cits, or civilians, but as cameras follow her every move, she soon learns that the more successful she is in her hunts, the more famous she becomes.

With millions of fans watching her on reality TV, Joy begins to realize that Apex is not all it seems. She is forced to question everything she grew up believing about the legendary Hunters and the very world she lives in. Soon she finds that her fame may be part of a deep conspiracy that threatens to upend the protective structure built to keep dark magic out. The monsters are getting in and it is up to Joy to find out why.

From Goodreads:
Joy wants nothing more than to live and Hunt in Apex City without a target on her back. But a dangerous new mission assigned by her uncle, the city's Prefect, may make that impossible.

In addition to her new duties as one of the Elite, Joy is covertly running patrols in the abandoned tunnels and storm sewers under Apex Central. With her large pack of magical hounds, she can fight the monsters breaking through the barriers with the strength of three hunters. Her new assignment takes a dark turn when she finds a body in the sewers: a Psimon with no apparent injury or cause of death.

Reporting the incident makes Joy the uncomfortable object of PsiCorp's scrutiny—the organization appears more interested in keeping her quiet than investigating. With her old enemy Ace still active in Hunts and the appearance of a Folk Mage who seems to have a particular interest in her, Joy realizes that the Apex conspiracy she uncovered before her Elite trials is anything but gone.

As the body count rises, she has no choice but to seek answers. Joy dives into the mysterious bowels of the city, uncovering secrets with far-reaching consequences for PsiCorp... and all of Apex City.

From Goodreads:
Being a member of the Elite Hunter Command imperils Joy in more ways than one. In their latest clash with Othersiders, the army of monsters nearly wiped them out. Apex City is safe . . . for now. But within the city barriers, Joy must wage a different kind of war.

The corrupt and powerful PsiCorps is determined to usurp the Hunters as chief defenders of Apex City and Joy is now squarely in their crosshairs. Unused to playing political games, she has very few people she can truly trust—not even Josh, her first friend in Apex City, who broke up with her when it became too dangerous for a Psimon to be dating a Hunter.

Then Josh comes to Joy for help. He fears that Abigail Drift, the head of PsiCorps, will soon use him in her twisted experiments designed to empower PsiCorps and render Hunters superfluous—a scheme that's already killed off dozens of Psimons. Joy manages to smuggle Josh to safety, but he cannot evade Drift forever . . .

As Joy faces ever more powerful Othersiders, she is helped by the most surprising ally imaginable—the same Folk Mage she once met in battle on the train to Apex City. But can Joy trust the most cunning and treacherous of all Othersiders?

In the thrilling finale to Mercedes Lackey's #1 New York Times' bestselling trilogy, Joy must risk everything to end a brutal war . . . before she loses all she's ever loved.

My first review of Hunter, Elite, Apex
My Review:
Yeah, wow, these books were so great to read again! And that I read them back to back, not with a year between each, made it just so great! Like, there were small details like the Island of California, which was only mentioned in Hunter. I wasn't planning on reading these books but I'm so glad that I did!

I really enjoyed going on this journey with Joy again, from first coming to Apex City, as a turnip, and becoming an Elite, and the losses and triumphs that she went through. They're just such darned entertaining reads! I just loved the relationships that she had with her Hounds, her fellow Hunters, and her uncle and Josh!

One thing that was really great about reading these books, was that there was this mention of fiction books, set in in the Victorian times, that was published around now. And I'm wondering, was Joy talking about Mercedes Lackey's other series? Because that would be so wild. I haven't read those books, so I'm not sure, but yeah, that be pretty cool!

I still hope and wish for a spin off series, or something that means we could spend more time in this world. There's still a lot that has to be solved, like Drift is out there, and so is Ace. And there are still Othersiders who want control of the world, since the golden dude was in an alliance. Yeah.

Loved these so much, they're just such excellent books!