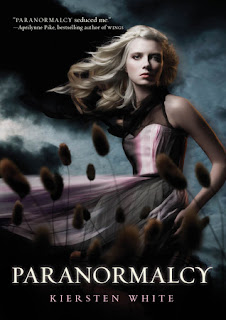 From Goodreads:
Weird as it is working for the International Paranormal Containment Agency, Evie's always thought of herself as normal. Sure, her best friend is a mermaid, her ex-boyfriend is a faerie, she's falling for a shape-shifter, and she's the only person who can see through paranormals' glamours, but still. Normal.

Only now paranormals are dying, and Evie's dreams are filled with haunting voices and mysterious prophecies. She soon realizes that there may be a link between her abilities and the sudden rash of deaths. Not only that, but she may very well be at the center of a dark faerie prophecy promising destruction to all paranormal creatures.

So much for normal.

My Review:
This was an awesome book! I don't know why it took me so long to get to it! I read it in about 2 hours or something, I really loved Evie, and how she was with pink, high school, and lockers!

And then there's her friends, and her, well, let's just say adopted family, since she was an orphan and all that with the Center and all. It was just so cute, and loveable and quirky! I loved Tasey, very funny!

The plot was amazing, slowing moving forward as Evie learned some things she sometimes didn't want to know, but not too slow, just fast enough to be interesting, but not to fast that you couldn't take in all the details!

To say something of the creatures in this book, and the series, I'm assuming, since I haven't read Supernaturally yet, and Endlessly (I think that's the title for the 3rd book, maybe without the "ly") were just amazing and creative! Like Lend, or Evie herself, they were just really amazing and new!

This was an amazing book, and you guys just HAVE to read it if you haven't!