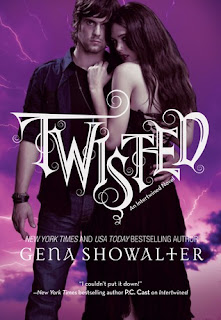 From Goodreads:
His vampire girlfriend might have brought him back to life, but he's never felt more out of control. There's a darkness within him, something taking over…changing him. Worse, because he was meant to die, death now stalks him at every turn. Any day could be his last.

Once upon a time, the three souls trapped inside his head could have helped him. He could have protected himself. But as the darkness grows stronger, the souls grow weaker—just like his girlfriend. The more vampire Aden becomes, the more human Victoria becomes, until everything they know and love is threatened.

Life couldn't get any worse. Could it?

My Review:
Wow, oh, wow! I loved this book! I really didn't want to end, and now I have a good reason-the next and final book, isn't supposed to come out for about 1 1/2 years! Summer 2013! I don't know if I'll be able to wait for the next Intertwined book! Well, there is The Darkest Surrender coming out soon, but still!

I didn't like Aden when he was being cold, but that was because of the vampire thing, and Junior, even before Aden knew about Junior. (Not going to tell you who Junior is.) But that situation dealt a pretty good hand in the end!

I loved Riley and Mary Anne, they went through a lot of suffering, and the way the book ended, they were going to go through a whole lot more! Oh, Riley, you're not making very good choices! And poor Mary Anne, after all she's been through, now is when you put you foot down?

I can't wait for a next book, and you guys are definitely going to have to read this book if you haven't! It was just so good!