Week 35 Review: A Whisper to the Living 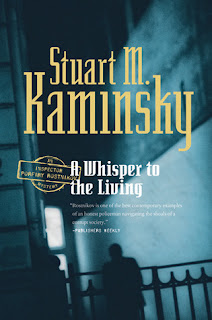 From Goodreads:
A Whisper to the Living continues the adventures (some would say trials and tribulations) of Inspector Porfiry Petrovich Rostnikov, an honest policeman in a very dishonest post-Soviet Union. Rostnikov is one of the most engaging and relevant characters in crime fiction, a sharp and caring policeman as well as the perfect tour guide to a changing Russia.

Rostnikov and his team are searching for a serial killer who has claimed at least 40 victims. And then there is the problem of protecting a visiting British journalist who is working on a story about a Moscow prostitution ring…and in doing so Rostnikov and his team uncover a chain of murders that lead to a source too high to be held accountable if the police want to keep their jobs.


My Review:
This was a pretty good book, and one that I enjoyed. I loved the mystery, though I was a bit confused about the characters on the team for a bit, mixing them up and such, and some details got repeated in away that wasn't not boring, but yeah. The language could be stiff or formal at times, but understandable.

There were a few parts where the characters made a theory, and then didn't tell us it, and sometimes not even telling us that.

Other then that, I really enjoyed the mystery, and the dead bodies, and all the events that were flying around, like a detective with a lost leg, and a wife who'd had brain surgery to remove a tumour, and such, and having a son that was on the father's team, and marring another on the team. And then 2 others who were single, or something similar.

This was a pretty book, and I enjoyed reading it, so if you have a chance, check it out!