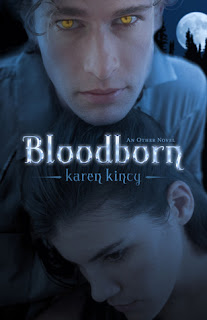 From Goodreads:
Brock Koeman had always loathed werewolves and Others like them. Then, while tracking a werewolf suspected of murder, he and his brother Chris were bitten--and infected with the very disease they despised. Chris is now fighting for his life in the hospital, but Brock faces another kind of battle: stifling the fierce urge to transform into a beast.

When werewolves kidnap him and the girl he loves, Brock discovers what it means to be Other--the thrill of unearthly powers, overshadowed by unrelenting danger. Brock begins to see the life that awaits him, but he must accept his new identity . . . before the wolf within kills him.

My Review:
Reading this book was really great! Because it's from the perspective of Brock, someone who in the beginning, hated Others, and as he goes on this journey, learns things aren't as simple as he thought. And that journey was really great to read!

So all of these books have been narrated by different characters. And while Brock, as far as I remember, isn't in the other books, he's part of this world, or well, he joins it! So it was really great to have a different, even though at the start, negative, perspective of the world!

This wasn't my favourite of the series, it was kinda the lower point on the series, because yeah, negative world view, that even if it changes to positive, well, it did have that negativity. It was a really fantastic book, but I didn't like it as much as Other and Foxfire.

I didn't really like Brock in the beginning, but he redeemed himself through this book as he changed! So for that reason, I would really love a 4th book, so he could be in it, and we could have more of this world! That would be really fantastic!

I just enjoyed this book a lot, not as much as the other 2, but I really want a 4th book and more time in this world with these characters!