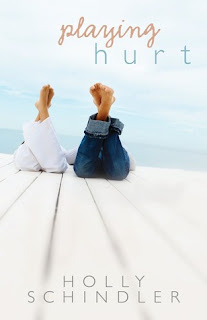 From Goodreads:
Star basketball player Chelsea "Nitro" Keyes had the promise of a full ride to college--and everyone's admiration in her hometown. But everything changed senior year, when she took a horrible fall during a game. Now a metal plate holds her together and she feels like a stranger in her own family.

As a graduation present, Chelsea's dad springs for a three-week summer "boot camp" program at a northern Minnesota lake resort. There, she's immediately drawn to her trainer, Clint, a nineteen-year-old ex-hockey player who's haunted by his own traumatic past. As they grow close, Chelsea is torn between her feelings for Clint and her loyalty to her devoted boyfriend back home. Will an unexpected romance just end up causing Chelsea and Clint more pain--or finally heal their heartbreak?

My Review:
I'm not someone that likes sports, as the big money things that people play. Sure, as fun and games and for some exercise, but not for the entertainment for others as money. Which could've been Chelsea's path had she not taken that fall. So I wasn't sure that I would like or connect to her or not.

But I did, because she was injured, and was mad at life, and was just in a pretty hard situation. Sure, she didn't make the best of choices in this book, what with Clint, and her boyfriend back home, but in the end, she made some better ones, and that was great!

I enjoyed the relationship between Chelsea and Clint. Even though she had a boyfriend for the beginning, well, this was the start of something that I think will last, because of all that they went through together.

Because this was a book about pain, and about healing, and they did that together, they both had events in their past that changed the direction that their lives were going in. And in a way, this book showed another event, but this time, a positive one!

Yeah, this was a pretty great book, and I enjoyed reading it!