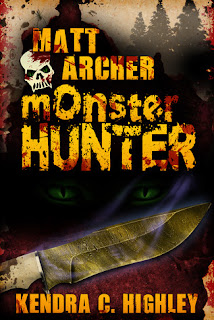 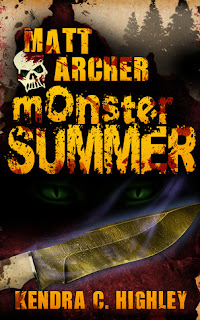 
From Goodreads:
In this companion short-story to Matt Archer: Monster Hunter, fifteen-year-old Matt Archer finds himself in the Australian Outback on the trail of his latest targets...and hunting hyper-intelligent, mutated Dingoes is not his idea of a great summer vacation.

The whole "special monster hunting knife" idea is pretty darn original to me, and then adding the way different monsters, and then adding the military, well, that just added great action, and a great number of ways for conflict, especially since Matt's 14 and having his 15th birthday, so of course he has a pretty protective family. I loved his sister, and that she wore down the guy in 19 hours. So hilarious!

The romance plotline, well, that was very cute, and sweet, with bumbling, and monster hunting getting in the way, and then helping. And it was just sweet the way that they slowly got together, from fighting about her boyfriend, to helping her heal, and such, and then her figuring out what he does...fantastic!

And then there's the short story, which picks up a month after MH, and we get to see Uncle Mike and Captain Hunter interact, and who they were as a couple, after finding out that she exists at the end of MH. Plus, we get all sorts of tidbits to advance the plot, like advanced talking monsters (and in English, too, which was really nice, because I have a very basic, basic Spanish vocab) and an up coming move. So yeah, this was a great novella!

I just really enjoyed this series, it was funny, and it was interesting, and it was entertaining, and what more can you ask for a book?

Excerpts:
Before I had a chance to dig out some marshmallows for s’mores, the air turned sharp and the wind gusted cold into the campfire, sending up sparks. Uncle Mike rose to his feet, with an intense, alert expression I’d never seen before—like he could eat a brick and enjoy the crunch.


Without looking at me, he said, “Weather’s changing; best to get inside the tent, where it’s warmer.”

With nothing else to do, we packed it in for the night. Mike didn’t allow me to bring a cell phone or anything else electronic on our trips. I could’ve played cards or something, but being outside always made me tired and I went to sleep early because, yes, I’m just that exciting. On the plus side, I had the craziest dream: Ella Mitchell ditched her boyfriend for me. That’s not weird—that’s plain, old wishful thinking. The weird part was that she hopped up on stage during assembly and stole the microphone from Principal Stevens to do it. Then I ran down the aisle to thunderous applause, swept her in my arms and….

“Get back!” Mike yelled.

I sat up in surprise to see shadows moving across the tent’s walls. One shadow was Mike's, distorted in the bright moonlight. The other…heck if I knew what it was. Bulky, taller than Mike by a long shot, it grunted and snorted like an angry pig. Was it a bear? I rubbed my eyes and squinted. No, definitely not a bear. The thing was much too big and shuffled along on two legs.

When it roared, it didn’t sound like any animal I’d ever heard, but more like a bulldozer’s engine. Every hair on my scalp stood up. Whatever this thing was, it wasn’t natural.

*A Few Lines Later after Matt catches whatever it is's attention*
I watched the creature’s shadow get bigger and bigger as it headed my way. It didn’t creep. It didn’t barrel toward me. It strolled, like it wasn’t the least bit worried about what it would find inside the tent. Terrified or not, something about its arrogance filled me with cold fury. My muscles burned and my heart beat double-time; I probably didn't have a prayer, but I wasn't going down without a fight. I sure as hell wasn’t going to sit by and let this thing kill my uncle.

Uncle Mike usually brought a rifle with him, just in case we met a bear, and he’d made sure I could use it. I dug around in our bags, throwing clothes everywhere, but the rifle wasn’t in the tent. The only thing I came up with was a wicked-looking knife with a smooth bone handle. I pulled it out of the leather sheath, shocked by its weight. It was much heavier than it looked and my fingers buzzed, like the knife was vibrating in my hand. I must’ve been shaking really hard.

I gripped the handle of the knife, hoping I didn’t end up stabbing myself by accident. The blade was longer than most hunting-knives I’d ever used—maybe eight or nine inches—and honed to a sharp edge. I had no idea where Mike would buy something like this, but one thing was for sure: no one would want to be on the receiving end of this weapon. It looked like it could gut a buffalo.

The creature walked the perimeter of the tent, brushing up against the nylon, and a rancid scent wafted through the walls. I gagged and threw up a little in my mouth. The stench reminded me of how the vent in my room smelled after my guinea pig got loose and bought the farm in the air duct. Seriously freaked out, I held still, clutching the knife so hard my knuckles ached. I was planning to let the beast stalk around outside as long as it wanted. One thing Mike taught me during paintball was to make your target do the work. If you could be patient, you’d get the better strike, and I’d only have one shot.

The beast paused and I took a gulp of cold air, knowing I wouldn’t have to wait much longer. With a blur of claws, dark fur and sharp teeth, the thing crashed into the tent, ripping the nylon with one slash. I didn’t have time to think or even get a good look at it. When it pounced on top of me, I thrust the blade into its stomach and twisted. The handle burned in my hand, glowing a faint green.

The beast howled and struggled against me, until I thought I’d drown in the reek of its fur. Somehow, I squirmed out from underneath it just before it collapsed on the floor of the tent. Once it was down, I stabbed it in the back, over and over, swearing at the top of my lungs. Some kind of red-rage took control, and I didn’t stop slashing until the thing shuddered and was still.

In the quiet, I fell to my knees, shaking all over.

When I could finally breathe without wheezing, I gathered up the last shreds of my courage and found our lantern in the wreckage. Scared pissless or not, I wanted to see what attacked me. Squaring my shoulders, I turned on the light.

Then bit my own tongue trying to hold back a scream.

The creature was misshapen, with a huge head, pointy ears and narrow snout, and it had to be at least eight feet tall. Teeth like tusks protruded from its lower jaw. It had brown fur like a grizzly’s and its paws looked like a bear’s too, except bigger, with those brutal, velociraptor claws. If that wasn’t weird enough, the thing’s arms and legs were long, like a man’s. It was like some mad scientist threw a bunch of DNA into a blender and this is what came out.

What the heck could it be? Was it some kind of alien? A scientific experiment gone horribly wrong? Did we have a Dr. Frankenstein living in Billings? Seriously, the creature looked like a resurrected Wookiee made from spare parts.

Utterly creeped out, I pulled the knife out of the beast’s back and dropped it on the ground. My hands had blood on them, dark stains glistening in the moonlight, and now that I wasn’t fighting for my life, I shivered, half-freezing and clueless about what to do next. 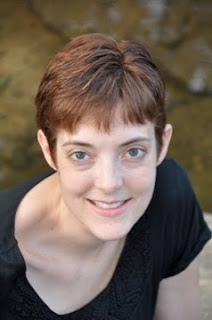 Bio:
Kendra C. Highley lives in north Texas with her husband and two children. She also serves as staff to two self-important and high-powered cats. This, according to the cats, is her most important job.

Kendra believes chocolate is a basic human right, running a 10k is harder than it sounds, and that everyone should learn to drive a stick-shift. She loves monsters, vacations, baking and listening to bad electronica.
More information about the Matt Archer universe, works in progress and the nature of the Higgs Boson* can be found at www.kendrachighley.com 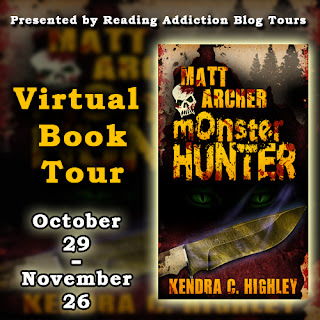