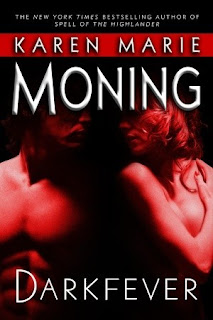 From Goodreads:
MacKayla Lane's life is good. She has great friends, a decent job, and a car that breaks down only every other week or so. In other words, she's your perfectly ordinary twenty-first-century woman. Or so she thinks…until something extraordinary happens.

When her sister is murdered, leaving a single clue to her death–a cryptic message on Mac's cell phone–Mac journeys to Ireland in search of answers. The quest to find her sister’s killer draws her into a shadowy realm where nothing is as it seems, where good and evil wear the same treacherously seductive mask. She is soon faced with an even greater challenge: staying alive long enough to learn how to handle a power she had no idea she possessed–a gift that allows her to see beyond the world of man, into the dangerous realm of the Fae….

As Mac delves deeper into the mystery of her sister’s death, her every move is shadowed by the dark, mysterious Jericho, a man with no past and only mockery for a future. As she begins to close in on the truth, the ruthless Vlane–an alpha Fae who makes sex an addiction for human women–closes in on her. And as the boundary between worlds begins to crumble, Mac's true mission becomes clear: find the elusive Sinsar Dubh before someone else claims the all-powerful Dark Book–because whoever gets to it first holds nothing less than complete control of the very fabric of both worlds in their hands…

My Review:
Wow, oh wow, I really, really, really enjoyed this book! It was really freaking good, and yeah, just really good! What a great world, great in that it's fantastical, and can be wrong in so many ways, but love that wrong!!!!

I loved Mac, and her growth, and I know I want to read more about her! And Barrons! So mysterious, and you'd think he'd be unlikable by how straightforward he was, not playing the social niceties game with the little lies, nope, not Barrons. One thing I really liked, was their ocular conversations, because first, the idea is a bit ridiculous in the first place, and second, that they were able to convey such meanings, well, yeah, that was pretty awesome!

Then there were all the players that were after the Sinsar Dubh, and how they visited all of them, how the stole the spear, and how then when those who they stole it from tried to retaliate, but died in the Dark Zone. Oh, and her MacHalo! And her names for things, just really great!

Or there was the mean old lady who didn't help Mac twice, once when she was looking at the Gray Man, and the other, the afterword of V'lane, and when his appeal caused Mac to strip in public. Yeah. Didn't like her at all, and I hope we never see her again!!!

Loved this book, this world, and these characters, and I can't wait to read more!!!