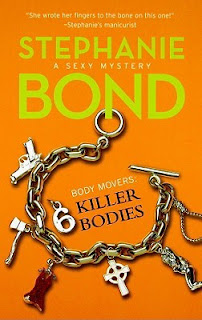 From Goodreads:
Carlotta Wren's world is crumbling beneath her well-shod feet. One of her closest friends has been arrested as the Charmed Killer, but Carlotta refuses to believe it. And to prove her friend's innocence, Carlotta goes against her boyfriend Peter's wishes and resumes her after-hours body-moving duties. And then...

Peter pressures her for an answer to his proposal...

And the madman stalking the city strikes again, this time a little too close to home.

But when Carlotta finds herself in the clutches of the Charmed Killer, is she destined for her own body bag?

So the stakes are the highest they've ever been, because there's a lot closer threat, because Cooper isn't the bad guy. Which means that the police are wrong, and so aren't going to be looking for the real bad guy. So of course Carlotta has to be the one to do that!

Who the bad guy is, oh, well, man, that was so well plotted! I wasn't expected that, well, I wouldn't have been if I hadn't read the end of this book while reading the last book! And yeah, that was just utterly perfect in how it all worked out!

I'm glad that I read this series now, because I just bought the 6.5 book, so I'm going to be reading that shortly, and then hopefully book 7 comes out soon after that, because I really can't wait to read it, what with their dad in prison at the end of this one!

Such a great book, and such a great series, I'm enjoying it so much, and I can't wait for more!